The Joker must have the Batman! Nay, the Joker deserves the Batman! What fun would there be in humbling mere policemen? I am the Greatest Criminal ever known! HA HA HA HA! And for anyone else to destroy the Batman would be unworthy of me!

The Joker is the archnemesis of Batman, representing the chaos to Batman's order. Initially, the Joker appeared to be little more than a colorful crook with a penchant for gimmicks, but as the years passed, his crimes became ever more gruesome, a possible reflection of his own increasingly downward spiral into insanity.

The Joker was once the criminal Red Hood and after an accident involving chemicals, his skin turned white, his hair green and his lips red, contorting his facial muscles into a perpetual malignant grin. The incident also drove the man irrevocably insane and he dubbed himself the Joker, becoming the most dangerous criminal of Gotham City and one of Batman's most notorious adversaries.[5]

Although the Joker preferred working alone (a ubiquitous horde of henchmen not withstanding), he occasionally teamed up with criminal mastermind Lex Luthor, and together they matched wits against the "World's Finest" team of Batman, Robin and Superman.[6][7]

Gotham City was the Joker's favorite location for his criminal activities. For this reason, he was confronted by Batman on several instances. When Joker impersonated a filmmaker and performed crimes posing as iconic comedians, his ultimate goal was to steal from a wealthy film fanatic, but his plans were foiled by Batman and Robin.[8] The Joker tried several more harmless criminal schemes, but the outcome was always the same.[9][10][11] 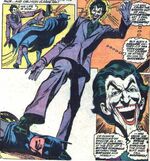 After his last caper, the Joker was captured and sent to a mental hospital for the criminally insane. The Joker's mental condition worsened and when he learned that one of his thugs had double-crossed him, the Joker broke out of the hospital and went on a murdering rampage, killing his former henchmen using his trademark Joker Venom, among other methods. With this new criminal mindset, the Joker was able to knock Batman unconscious and had the chance to kill him once and for all, but he refused to do so and in the end, it allowed Batman to capture the Joker and bring him back to the authorities.[12]

Somehow, the Joker escaped and murdered a whole family, making the crime look like a frame-up from other criminal. Batman fell for the Joker's gag and he tried to help the Joker capture the real culprit. The Joker used Batman and led him to a trap, but Batman managed to survive and captured the Joker as he tried to escape using the Batmobile.[13] Not long after this, the Joker escaped from Arkham, even though Batman tried to stop him. Joker managed to dose Batman with a special variation of Joker venom, which could kill the Dark Knight from laughter in 72 hours. The Joker murdered one of the scientists capable of creating a cure, but Batman reached the second doctor and captured the Joker by overcoming the urge to laugh. In the end Batman was cured and the Joker locked up.[14] However, the Joker escaped and he poisoned an entire prison as a result of his plan to poison a former henchmen. The Joker then got hold of the antidote and forced Batman to fight against Wildcat. The heroes managed to retrieve the antidote and captured the Joker.[15]

The Joker started having conflicts with the rest of Batman's enemies and he always proved to be superior or equal to them. When Two-Face escaped from Arkham leaving the Joker behind, the criminal clown broke out and thwarted Two-Face's criminal plot, resulting in both of them being taken back to Arkham.[16] After this, the Joker was sprung out again by Willy the Weeper, who wanted the Joker's assistance on a crime. The Joker tried to double-cross Willy and they both were captured by the authorities.[17] Later, the Joker started a series of robberies and The Creeper was blamed for them. This led to a confrontation between them in which Creeper lost his memory. The Joker tried to capitalize on this amnesia, but when Creeper recovered, the Joker was defeated and captured once again.[18] 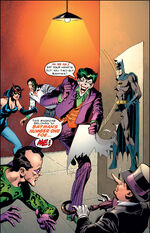 Later on, the Joker tried to start a crime spree in Star City, where he also tried to get Dinah Lance to marry him. He was promptly stopped by Green Arrow, but this time the Joker was not captured by the authorities.[1] Eventually, the Joker reappeared in Wisconsin, where he started another caper and caused the capture of the Royal Flush Gang after they became enemies on their quest to steal valuable art pieces.[19] Later, the Joker replicated crimes from the Sherlock Holmes stories, but his plans were eventually thwarted by a real life Sherlock Holmes.[20]

After this, the Joker caused an accident during one of Lex Luthor's experiments, which caused them to switch personalities, but the change was soon reverted.[21] It was around this time that the Joker created a secret passageway between his cell in Arkham Asylum and his secret Ha-Hacienda hideout. Using this means of escape, the Joker stole a fear gas developed by S.T.A.R. Labs, which caused the master criminal of fear, the Scarecrow to confront him. The Joker outsmarted the Scarecrow and then he returned to his cell in Arkham to throw off the police's suspicions.[22] The Joker then tampered with a famous actor's film to include himself, but during the crime he was confronted by Catwoman, who wanted to steal the actor's valuable cat. The Joker was defeated and locked back in Arkham, but he got the last laugh.[23]

Later, the Joker escaped from Arkham again and the final confrontation between him and Batman took place in a house of mirrors, where the Joker was recaptured.[26] Eventually during one of his regular crimes, the Joker came across a man disguised as Batman and he killed the innocent, believing he was the real Batman. When word about Batman's death spread, the Joker was summoned to a trial among criminals and told the story of his victory over Batman. However, the whole trial turned out to be one of Batman's plans in order to find the killer of the innocent man and after the Joker confessed his crime, he was captured by the Dark Knight and returned to Arkham.[27]

The Joker eventually escaped and attended an auction organized by Hugo Strange to reveal Batman's identity.[28] The Joker wanted to prevent that from happening, but when he learned that Strange had mysteriously disappeared, he assumed some of the other criminals must have eliminated him; namely Rupert Thorne. Once that was taken care of, the Joker set his next plan in motion and he used a chemical across the shores of Gotham that contaminated the waters, transforming the fish to grotesque creatures with the Joker's face on them. The Joker's goal was to secure trademark for the "Joker Fish", but when he was denied, because of the law, the Joker started a killing spree against public servants, announcing their deaths and killing them with his trademark Joker Venom.[29]

The Joker managed to claim two victims thanks to his careful planning, but during his third murder attempt, he was stopped by Batman. the Joker tried to escape, but Batman chased him through the rooftops of Gotham until they reached a construction site, where the Joker was shocked by lightning and fell to the river below. The Joker didn't come up after that last blow, but this was not his demise.[3]

True to form, the Joker returned soon and started a loan shark business, killing his clients when they refused to pay his fees. This new crime caught the eye of Batman, who teamed up with Black Canary, the Joker's past crush, and managed to put an end to the Joker's crime spree with some vital help from Bruce Wayne's butler, Alfred.[30] The Joker's next scheme consisted of kidnapping several of Batman's allies including Robin, Commissioner Gordon and Alfred. He placed them in a death trap to lure Batman, but his plan was ultimately thwarted by the Dark Knight. In the ensuing confrontation, the Joker met his apparent demise as his escape vehicle blew up in flames.[31] As usual, the Joker survived and he was locked in Arkham under undisclosed circumstances. He eventually escaped and returned to Gotham with a new scheme to murder Batman using deadly toys. The Joker's crimes and clues were left deliberately, as he wanted to lure Batman into his trap. His plan succeeded and Batman was forced to fight several deadly toys until death. However, Batman found a way to stop the toys and the Joker was subsequently captured.[32]

When the Penguin was apparently murdered by the Joker, the Clown Prince of Crime sought help from Batman to clear his name and together they uncovered a plot to frame him by the same Penguin.[33] Later, the Joker tried to murder Batman at the same time as he carved a giant bust with his face. His plan was once again thwarted by Batman.[2] When the Joker learned about a new and uprising crimelord in Gotham called Killer Croc, he gathered many of Batman's greatest foes and prepared a plan to eliminate both Batman and Croc at the same time. Of course, this plan failed and the Joker was unintentionally defeated by Croc.[34] 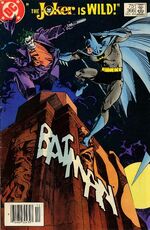 Madness Until the End

Having escaped from Arkham again, Joker relocated to Guatemala, where he planned to take over the country by creating an armed conflict between the people. When he learned that reporter and photographer Vicki Vale was investigating his activities, he kidnapped her, which in turn drew the attention of Batman.[35] Although Batman managed to foil the Joker's plans,[36] the Joker was only brought down by the combined work of Batman and the new Robin, who arrived in time to assist Batman against the Joker, securing victory.[37]

On his last criminal act, the Joker was among the various inmates released from Arkham Asylum by Ra's al Ghul to eliminate Batman, but despite their combined efforts, they were ultimately defeated by the Dark Knight and his allies.[38] After the events of the Crisis on Infinite Earths, Joker's existence and history was completely altered, transforming him into a different person, existing on a different reality.

This history is continued with appropriate Post-Crisis revisions at Joker (New Earth)
In the Crisis on Infinite Earths, the Pre-Crisis Multiverse was collapsed into a single merged reality and Earth-One ceased its separate existence. Substantial elements (people, places, events, etc.) of Earth-One's reality were folded into the history of New Earth, but significant details about the original history were often changed or excised accordingly. This was the status quo of the DC Universe until Convergence retroactively prevented the Multiversal collapse.

Retrieved from "https://dc.fandom.com/wiki/Joker_(Earth-One)?oldid=2765231"
Community content is available under CC-BY-SA unless otherwise noted.