Jonah Hex was a renowned bounty hunter in the American Old West.

Jonah Hex was born on November 1, 1837/1838[1], the son of Woodson and Ginny Hex. Woodson, a small farmer, was a gambler and a drunk, which did not do his marriage good. Jonah defended his mother every time his father laid his hands on her, and ended up getting the punishment himself. Unable to live with it any longer, Ginny left him and married a trader, Mr. Dazzleby.

Down on his luck, Woodson traveled to California during the Gold Rush. He was waylaid by Apache, and offered Jonah in return for safe passage. He was raised by them, befriending White Fawn and making an enemy out of Noh-Tante. Noh-Tante, still filled with hate for Jonah, doublecrossed him during a raid on the Kiowa, declaring he would never be an Apache. The boy was left for dead and found by passing settlers.

Years later, Jonah joined the Confederate States Army in the Civil War. He led a raid on a Union fort, which was a disaster. Cut down by Gatling guns, Jonah was wounded and most of his men dead. The fort commander, Colonel Akerman, had Jonah tied to a stake and whipped. He was then put on a raft to be carried down river as a warning to other rebels.

After being nursed back to health, Jonah returned to the Apache village, where he challenged Noh-Tante. He beat him, with a knife because Noh-Tante had sabotaged his tomahawk. However, for breaking the rules, Jonah was mutilated; the chief pushed a scorching tomahawk against his cheek.[2]

During the early 1880s, Amadeus Arkham was recruited by Detective Lofton of the Gotham City Police Department to help solve the case of the Gotham Butcher. Police Chief John Cromwell didn't take kindly to Arkham's theories, nor to the eventual recruitment of bounty hunter Jonah Hex, who had recently caused a stir by coming to town.

Even so, recognizing Hex's street smarts, Arkham suggested that the two of them join forces in performing a separate investigation into the case. Together, they uncovered Gotham City's sect of the Religion of Crime, and its relation to the Butcher case.[3]

War of Lords and Owls

After rescuing Catherine Wayne from Vandal Savage, Jonah finally left Gotham City for good. While in Red River Junction, North Dakota, he ran into Booster Gold, a superhero from the future who was acting as the local sheriff since his predecessor was murdered by a man called Clem Hootkins and his gang.[4] When most of the Hootkins gang ends up dead, Jonah and Booster end up fighting off the remains of the Gang and wind up traveling through time and space, but they end up separated, with Jonah landing in modern-day Gotham City.

Upon emerging in the future, Jonah intervenes in a Mutants attack on a family, killing off the attackers; he is subsequently attacked by the Gotham City Police Department and then Batwing, subdued, and institutionalized in Arkham Asylum.[5]

Man Out of Time

While living in the 21st century, Jonah had contact with several notable individuals, including Dr. Jeremiah Arkham (descendant of Amadeus Arkham), Bruce Wayne, Swamp Thing, John Constantine, and Superman. He also befriended Gina Green, with whom he became romantically involved with.

While riding a motorcycle intoxicated, Jonah crashed and spent a month in a coma, during which time plastic surgeons were able to repair his scarred face (having believed that the scarring was a result of the accident). Shortly after awakening, Jonah was returned to the 1880s by Booster Gold, alongside Gina who decided to join him in her past.[6][7]

End of the Trail

Upon returning to the Old West (approximately one year after he'd been taken to the future), Jonah reunited with Tallulah and learned that an imposter had usurped his identity while he was away. The man claiming to be Jonah Hex was wanted for a year's worth of murders.[8] Jonah eventually tracked down the imposter and killed him in cold blood. The public, unaware that there had been an impostor at all, was astounded and wanted to learn the name of the man who killed Jonah Hex - upon which Jonah replied with a pseudonym, "George Barrow".[9]

According to unreliable history files accessed by Batman in the present, one tale of Jonah's death was that he was killed at the card table by a man named "George Barrow" in 1904 at the age of 66, a bastardization of the story of his impostor's death.[1]

Hex was deceased long before the present and revived as an undead by Batman using the Black Lantern Ring, when the Multiverse was threatened by Perpetua (Sixth Dimension) and her lieutenant, the Batman Who Laughs from the Dark Multiverse. Hex went to Gotham, now transformed into a nightmarish continent, in order to free its people along with a band of other revived heroes, but all were killed by a Joker Dragon except him.[10]

Hex later encountered Batman, who had himself come to free the Gothamites. He insisted on killing the dragon, despite Batman wanting to flee. He soon realized Batman was falling under the ring's influence the more he used it and tried to cut it off, but was stopped by him. Batman gave in to his demand of killing the dragon so it didn't harm others, and gave him milk to disrupt its navigational. As he killed the dragon with a helicopter, Jonah stated he knew he chose him because he didn't have a moral code like the superheroes.[10]

The two later went to Castle Bat to kill the Batman Who Laughs and left him to lead the resurrected Dead Bats against his army. The attack however was unsuccessful,[11] and the two escaped back together to the Hellscape (the transformed United States). Coming at the Valhalla Cemetery, he helped him in picking dead heroes to revive for his army, in order to take Castle Bat. When Wonder Woman came to convince Batman to save the Multiverse, Hex argued in her favor and when he was convinced, they left together for the Arkham Wastelands.[12]

In the wastelands, they successfully took down Dr. Arkham and his monstrous bats, before travelling on to New Apokolips in the heart of the Sun using the Trinity Rocket made by the Toymaster. Barging into the Darkfather's headquarters, they took him and his Pararobins down and freed Superman as well as the Justice League.[13] Wonder Woman chose to take Hex along with Batman, Superman, Swamp Thing, Harley Quinn to infiltrate Castle Bat and get to the crisis worlds in the Dark Multiverse, where Perpetua was getting power from to reshape the Multiverse.[14]

As the heroes tried to infiltrate Castle Bat, Hex found the place had too many traps, but Swamp Thing created a tunnel for them after absorbing all the Green. As they neared the end of the tunnel, they were assaulted by the Dark Knights and struggled to beat them, but Jarro soon separated them by controlling Castle Bat's mind. As Wonder Woman, Batman and Superman entered the portal to Dark Multiverse, the others stayed outside to guide them back but were soon attacked by Robin King. Hex shot him while he fought Harley, but he shot him back with a Debrider-laced bullet that started eating up his undead tissue.[14]

The Robin King soon confronted Harley and her allies again, bringing Hex's rotting body along. He ignored her pleas to let Hex go, before showing her the knife made by the demonic lord Neron, which would send any sinner it was used to stab to Masak Mavdil. Jonah reassured Harley it was okay and stated that he deserved it when she pleaded again, before telling her she didn't deserve a fate like him. As he told her to run, Robin King stabbed him with the knife, resulting in his disintegration.[15] 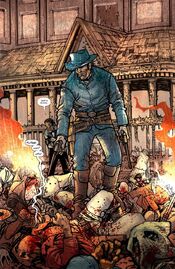 Jonah Hex demonstrates his ability to kill everyone.

Retrieved from "https://dc.fandom.com/wiki/Jonah_Hex_(Prime_Earth)?oldid=2868106"
Community content is available under CC-BY-SA unless otherwise noted.