Fear is the most powerful emotion.

Jonathan Crane is the Scarecrow, an enemy of Batman who uses his special Fear Toxin to cause his victims to hallucinate their greatest fears.

Before the Joker's infamous attack on Metropolis, Jonathan Crane was a scientist obsessed with fear. Whipping up a formula for a fear toxin, he took the streets of Gotham as Scarecrow, battling Batman and Robin. Multiple times he was arrested and sent to Arkham Asylum and multiples times he broke out. 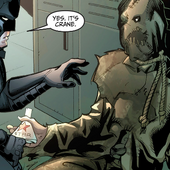 When the Joker set his sights on Metropolis to terrorize and break the city's Man of Steel, the clown hunted down his fellow Gotham rogue Scarecrow to use his fear toxin as part of his scheme. Together, Joker and Harley Quinn used their Joker Gas against Scarecrow to incapacitate him long enough to steal his toxin, leaving him for dead with a huge smile stuck on his face.[1] Scarecrow's body was found in S.T.A.R. Labs by the Flash and, because of his apparent exposure to Joker gas, was presumed dead.[2]

With Scarecrow's gas, the Joker tricked Superman into killing Lois Lane and destroying Metropolis, sending the hero into a frenzy and initiating a new world order.

Having survived his encounter with the Joker, Scarecrow reappeared as an active criminal during the fifth year of Superman's Regime but was detained by Damian Wayne.[3] Scarecrow was sent back to his cell in Arkham where, if any combatant was unluckily knocked into his clutches, he was prepared to spike them with a stash of his fear toxin.[4]

Joining Gorilla Grodd's Society, Crane revamped his fear toxin and attempted to move it in large quantities out of Slaughter Swamp but was interrupted by agents sent by Batman. Dousing Harley Quinn with his new formula, he was ultimately defeated and forced to escape back to Gorilla City on his boat.

Later, Crane would continue to support the Society, despite Brainiac's attack, by attempting to subdue the united heroes until, finally, the Society was disbanded after discovering Brainiac's intention to destroy the Earth.[5]

Now the Skull Ship is my laboratory. As it glides through the vast darkness of space, its collected beings are subjected to their worst nightmares. With each I study, my knowledge grows. It may take decades, but I will become the universe's greatest master of fear."

Retrieved from "https://dc.fandom.com/wiki/Jonathan_Crane_(Injustice)?oldid=2748977"
Community content is available under CC-BY-SA unless otherwise noted.