I respect the mind's power over the body. It's why I do what I do.

Dr. Jonathan Crane was the acting chief psychiatrist at Arkham Asylum who used psychotropic drug that induced frightening hallucinations. Due to the fear the drug inspired, he created a mask modelled on the archetype of a Scarecrow.

Crane acted as an expert witness in Gotham's courts, testifying to the mental state of those pleading insanity, primarily in favour of the defence to keep criminals protected by the mob out of prison. The corrupt Crane convinced a jury that Victor Zsasz, who was on Carmine Falcone's payroll, was insane. Assistant District Attorney Rachel Dawes, was suspicious of Crane's testimonies which had kept three of Falcone's men out of prison and confronted him.

Crane secretly met with Falcone to inform his associate that it was becoming increasingly dangerous as Dawes became more bold. Falcone wanted certain favours of his own, despite being paid well for smuggling Crane's drugs into the city. Crane explained his employer would not be happy about his operation being compromised, and insisted the meddling Dawes be dealt with.

Falcone was ambushed by the Batman while overseeing a shipment of Crane's contraband and left for the GCPD to discover. Crane was called down to where the crime boss was being held and Falcone expected the doctor to diagnose him as temporarily insane and be moved to Arkham. Crane was more concerned about what Falcone had told police about their arrangement and proceeded to show Falcone his mask. Once the disturbed psychiatrist had donned his Scarecrow visage, he sprayed Falcone directly in the face with an aerosol solution of his drug, causing the hardened criminal to scream out in a fit of panic. Crane had no problem convincing people Falcone was crazy. 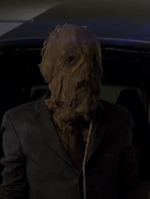 Rachel Dawes was not impressed by the motion Crane filed with the judge for his transfer to Arkham, and demanded an independent toxicology report. Crane played along, escorting her to the elevator to show her something she would find interesting. In the basement of the institution he opened her eyes to his grand scheme of contaminating the City's water supply with his compound, before introducing her to a concentrated dose. Crane's operation was uncovered too late by the Batman who gave the doctor a taste of his own medicine, forcing him to reveal his employer as Ra's al Ghul under interrogation of what Crane perceived was a horrific human bat.

Gordon had Crane committed at Arkham, but when Ra's al Ghul's plan was set in motion, the League of Shadows freed all the inmates within a violently paranoid Gotham. Crane was personally freed and given his mask, commandeering a police horse and riding through the streets revelling in the chaos. The madman came across Rachel Dawes protecting a terrified child, but as she was immunised by Batman, she fought back with a taser, and the unconscious Crane was whisked away on horseback.

Crane acting as a judge in Bane's Gotham

Evading capture after the mass breakout of Arkham, Crane became a drug dealer, peddling his own unique compounds where he could. When meeting with the Russian mob, Crane was ambushed by a group of copycat vigilantes dressed as Batman. The real Dark Knight soon showed up, restraining and unmasking Crane.

After Bane took control of Gotham, Crane was freed once again with all the other inmates, presiding as judge over his own kangaroo court, offering the rich and powerful a choice between death or exile, which were essentially the same sentence.

Retrieved from "https://dc.fandom.com/wiki/Jonathan_Crane_(Nolanverse)?oldid=2765332"
Community content is available under CC-BY-SA unless otherwise noted.