Described by The Chief as a "genius bio-chemist who suffered a mental collapse". Mr. 103 first appeared in Midway City robbing banks, using his ability to transform his body, or parts thereof, into any element of his choosing. 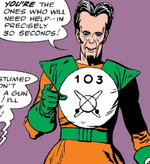 The Chief theorized that Dubrovny had been experimenting with teleportation, requiring the separation of a man's body into its component elements. He developed a machine which could emit a ray beam capable of bestowing the ability to change into the elements.

The Chief shockingly declared the Doom Patrol to be a failed experiment and disbanded the team, but Negative Man reorganized the trio in a new headquarters. Failing to stop the shape-changing maniac, the Doom Patrol returned to the Chief for help, only to find him dying of radioactive blood poisoning. Knowing he was doomed, he had deliberately severed relations with the team, hoping they would try to succeed without him.

Now he enabled them to defeat Mr. 103, using a ray based on an extraterrestrial element. Negative Man then forces the captured villain to use his transformation process to cure the Chief's illness.[1]

Dubrovny was later recruited by the Suicide Squad on a mission to rescue Hawk in Nicaragua. This mission went poorly and Dubrovny was seemingly killed fighting the Rocket Red Brigade.[2] 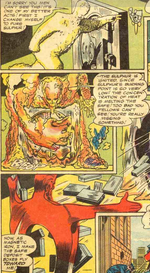 Retrieved from "https://dc.fandom.com/wiki/Jonathan_Dubrovny_(New_Earth)?oldid=2765638"
Community content is available under CC-BY-SA unless otherwise noted.