Just so we understand each other. The Calendar Man is being forgotten. I can't have that.

Calendar Man is fascinated by dates and calendars – even his real name is a pun on the Julian and Gregorian calendars.

His crimes always have a relationship to the date that they are committed. The theme may be related to what day of the week it is or to a holiday or to a special anniversary on that date; he will plan his crime around that day. He often wears different costumes which correspond to the significance of the date, though he does have a main costume which has various numbers (meant to represent days on a calendar) sprouting from the shoulders.

On his first documented case, the Calendar Man began committing a string of crimes based on the four seasons. Inevitably, this brought him into conflict with the Caped Crusaders Batman and Robin. Their encounter ended when Batman unmasked Julian who was disguised as an Indian magician (representing the "5th Season", Monsoon season).[1]

Calendar Man eventually returned to plague Gotham City, armed with several different costumes and well-thought crimes for every day of the week. Day's crime capers were successful, especially when he seriously injures Batman internally with a blast of ultrasonic thunder when he interfered in Calendar Man's Thursday crime. With Batman thus forced to convalesce in bed for days, Calendar Man's Friday and Saturday crimes were committed without meaningful opposition. However, Batman deduced that Calendar Man would not attempt to steal a priceless artifact of the Egyptian Sun God, Ra, on Sunday, where the police were waiting for him. Instead, Calendar Man would attempt to escape with his stolen loot on Sunday, since it is the traditional day of rest. To that end, Batman sneaks out of bed against his butler's wishes and stops the Calendar Man at the train station before he boards the Western Sun Express.[2]

Calendar Man was subsequently contacted by the Monitor, who hired him to eliminate Batman.[3] Calendar Man started a series of crimes with his usual modus operandi and he planned to use the new Robin in order to kill Batman.[4] As usual, his plan failed and he was stopped by Batman and Robin.[5] 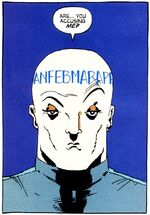 Much later, Calendar Man was being treated at Arkham Asylum, when a serial killer named Holiday began killing Gotham's mob bosses on holidays. Calendar Man agreed to help Batman, but only because he believed that he was "being forgotten". Calendar Man deduced that the killer was Alberto Falcone but hid the information from Batman. After escaping Arkham, Calendar Man tortured Alberto by pretending to be the ghost of his late father Carmine, telling him to take over the Five Families of the Mafia. Calendar Man attempted to kill Alberto, but was attacked by Sofia Gigante. Gigante ruthlessly beat the Calendar Man, and broke his jaw. The Calendar Man was later found by police and taken back to Arkham. Another holiday-themed killer surfaced called Hangman.

Retrieved from "https://dc.fandom.com/wiki/Julian_Day_(New_Earth)?oldid=2715876"
Community content is available under CC-BY-SA unless otherwise noted.