DC Database
Register
Don't have an account?
Sign In
Advertisement
in: Dennis O'Neil/Creator, Dick Dillin/Creator, Clean Up,
and 11 more

The original satellite would be the League's home for several years. Members were able to teleport to and from the satellite using teleportation centers located across the planet. League members took turns on watch duty, monitoring Earth from the satellite and dispatching the League as needed. This

The original satellite would be the League's home for several years. Members were able to teleport to and from the satellite using teleportation centers located across the planet. League members took turns on watch duty, monitoring Earth from the satellite and dispatching the League as needed. This era of the Justice League (and its roster of heroes), is commonly referred to as the "Satellite League".

The JLA Satellite was the site of the murder of Mr. Terrific by his enemy, the Spirit King.[1]

The underpinnings of the League began to strain, as many of its most important members found themselves devoting less time to the JLA for a variety of reasons; The Flash experienced tragedy in his personal life, while the "big three" of Batman, Superman and Wonder Woman were committed to their own caseloads. When the satellite was destroyed by the Green Martians, Aquaman decided the destruction of the satellite provided an opportunity to disband the JLA and start over. The satellite was subsequently used once more by Batman and the Outsiders to restore Halo's lost memory with the equipment inside the place.[2]

The original satellite met its final and complete destruction during the Crisis on Infinite Earths, when it was destroyed by a self-destructing Red Tornado that had been sabotaged and tampered with by the Anti-Monitor.[3] The satellite's flaming wreckage fell to Earth, nearly destroying the city of Detroit, but disaster was averted by the new Justice League under the Martian Manhunter's direction.[4] 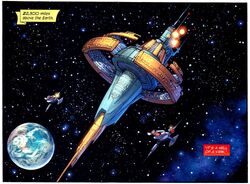 A number of years later, a new incarnation of the League built a new JLA Satellite as a companion and counterpart to the Hall of Justice, the public headquarters located on the Mall in Washington, DC. Designed by Green Lantern John Stewart and others in the League's roster and circle of allies, the second satellite sits in geosynchronous orbit some 22,300 miles above Earth, like its predecessor.[5]

The satellite was divided between various "decks". The quantity of decks varies according the source. It had artificial gravity.

This deck communicates with the outer rim.