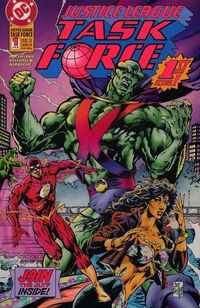 Justice League Task Force was published by DC Comics from 1993 until 1996, spanning a total of 38 issues. The series adopted a more serious and militaristic tone than that of its lighthearted precursors Justice League International (Volume 1) and Justice League Europe (Volume 1) and featured a rotating cast of characters, while still managing to spotlight recurring team members such as the Martian Manhunter, Despero/L-Ron, Gypsy, Mystek, the Ray and Triumph.

Retrieved from "https://dc.fandom.com/wiki/Justice_League_Task_Force_Vol_1?oldid=2671552"
Community content is available under CC-BY-SA unless otherwise noted.