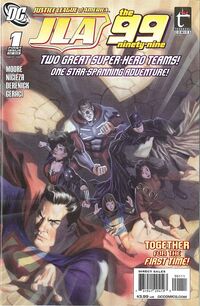 Justice League of America/The 99 was a six-issue limited series published by DC Comics. It featured the Justice League and the 99, characters with copyrights held by Teshkeel Comics. This is the first cross-over comic between DC Comics and Teshkeel Media Group, a company that has been publishing select Arabic translations of DC Comics since 2006.

Retrieved from "https://dc.fandom.com/wiki/Justice_League_of_America/The_99_Vol_1?oldid=1566559"
Community content is available under CC-BY-SA unless otherwise noted.