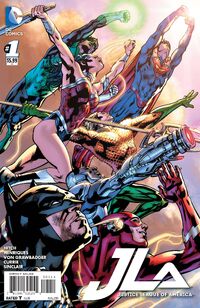 Justice League of America (Volume 4) was an ongoing series, published by DC Comics. It ran from 2015 until 2017. It starred Justice League.

It was published concurrently with Justice League (Volume 2) but does not feature a different Justice League team. The series showcases the writing of Bryan Hitch who is primarily known for his artwork.

Several delays hit the final few issues of the comic series before it was ended to make way for a relaunch as part of DC Rebirth.

Retrieved from "https://dc.fandom.com/wiki/Justice_League_of_America_Vol_4?oldid=2333826"
Community content is available under CC-BY-SA unless otherwise noted.