"Justice Riders": In the Wild West, Felix Faust is imprisoned for a drunken disturbance in the town of Paradise's jail and watched over by Sheriff Oberon. Faust warns Oberon to release him as something will come and destroy Paradise. Oberon ignores Faust's threats until a loud rumbling and brigh

They rode together only that one time. Though with the help of your talents...they may ride together as what they truly were..."Legends."

Justice Riders is a one-shot published in 1997.

In the Wild West, Felix Faust is imprisoned for a drunken disturbance in the town of Paradise's jail and watched over by Sheriff Oberon. Faust warns Oberon to release him as something will come and destroy Paradise. Oberon ignores Faust's threats until a loud rumbling and bright lights engulf the jail.

The next day, Sheriff Diana Prince leads two horse thieves to Paradise and finds the town destroyed. She lets the thieves go as they are no concern to her now. She then finds a barely alive Oberon under the jail's rubble. Following Oberon's death, Diana buries him and swears to avenge him and Paradise.

In Diablo Wells, Wally West, under the identity of Kid Flash, serves as the town's bouncer and meets with Diana. At the local saloon, Kid Flash hears from Diana of Paradise's fate and needing his help. The two are then met by Booster Gold who offers to assist in their cause. After some doubt of Kid Flash's age, the speedster demonstrate his fast shooting with Gold's bullets, forcing Gold to need more "talents".

Diana and Kid Flash rides to the Indian Territories in recruiting Katar Johnson. While riding Diana acknowledge Kid Flash's incident with Barry Allen's death. The two meet with Katar Johnson who suits up as the Hawkman.

Meanwhile, Booster Gold arrives at Ted Kord's machine shop for a gun "in the speed category". Kord happens to have one in the back of his shop.

Elsewhere, Felix Faust is berated by his boss, Maxwell Lord, for delaying him from his project in expanding a railway across Arizona in a desolate running region. Seeing as Faust is useless in comparison to his "men," he then talks of dealing with Diana Prince.

In a saloon, Diana, Katar and Kid Flash discuss what will happened to Paradise. Diana explains that the debris of the buildings in the town were glazed with glass, the water seem to have evaporated completely from the town, and that every animal and human were stripped to the bone. Furthermore, she explains that before Oberon died, he told her that Faust worked for Maxwell Lord. The three are beset by Lord's men and a gunfight erupts between them. During the fight, they discover that these "men" are really machines. They are saved by machine-gun fire from Booster Gold who is armed with a portable Gatling gun, and accompanied by Ted Kord along with his steam wagon.

The group inspects the automatons, and Kord notes how they are a more sophisticated clockwork than he has ever seen. Diana suspects Lord is behind this, to which Kord elaborates on Lord's background to be a crime baron who operates in a town call Helldorado. Kord and Gold join Diana and her team as they all head for Helldorado.

Meanwhile, the bounty hunter Guy Gardner, known widely as "Kid Baltimore", arrives in the west with the intent in killing Wally West for the murder of Marshal Barry Allen.

That night, as Diana and her posse make camp, they encounter the mysterious John Jones who joins their quest, not because of Lord, but who he is allied with.

Meanwhile, Lord is alerted by Faust of the destruction of his clockwork robots. Knowing that Diana will come for him, Lord assures Faust that he is prepared, revealing the undead cowboy crates containing advanced machine parts that did not originate from Earth.

Diana and the riders find a destroyed sod house and its dead inhabitants, much similar to Paradise and marking the sixth similar discovery they come across. The riders continue on as Guy Gardner watches them from afar.

The posse follows a train track to Helldorado while noticing that after traveling for fifty miles, there isn't any sign of either life, nor a station of any kind. Hawkman returns to the group and shouts his discovery of Helldorado. The riders gallop onward to an industrial complex littered with robots. Diana decides to confront Lord in full daylight.

Diana, Kid Flash, John Jones, and Hawkman confront the town's "denizens" in bringing Lord to justice. In another part of Helldorado, Gold and Kord ready their machine-gun, but are then held at gunpoint by Guy Gardner.

The posse are met by Faust and Lord, and Diana demands to know why he destroyed Paradise. Lord explains that Paradise was impeding his progress in building his railway to California. Since he possess an army of robot workers, Lord's operation is pure profit without the need of human workers. Having heard enough, Diana duels with Lord, only to discover he is another robot. All hell breaks loose in a gun battle between the posse and Lord's machines.

In an alleyway, Guy is surprised by what transpires and is convinced to help Gold and Kord after hearing from the two that losing Kid Flash to the machines would spoil Guy's reputation. 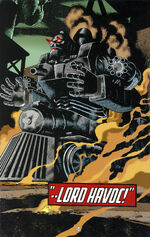 The posse is almost defeated, but Faust decides that their end must come in grandeur, and introduces the real Maxwell Lord driving a steam-powered robot known as "Lord Havoc." A power crazed Lord fires his weapons upon the riders as they flee. Fortunately, Gold, Kord and Gardner ride on Kord's steam schooner at high speed, ramming Lord Havoc and destroying the machine for good.

Lord emerges from the remains of Lord Havoc and is arrested by the Diana. Kid Flash catches Faust trying to escape and is confronted by Gardner who has a warrant for his arrest for the murder of Barry Allen. Kid Flash angrily points that it was a mercy kill Barry, but Guy refuses to listen. As they argue, Faust grabs a shotgun and prepares to shoot the two, but is quickly gunned down by both Flash and Gardner. The two quickly turn their guns on each other until the posse vouches for the Kid, forcing Guy to back off.

Under advisement from Jones, Diana interrogates Lord to find out where he got the technology. He directs them to a rail barn where the posse find Lord's partner, a Dominator. Jones explains that he has been searching for the Dominator for sometime and plans to return it back where it came from.

With their task complete, the posse decides to separate. Kid Flash flees to Mexico because of Guy. Hawkman returns to the Indian Nations. John Jones returns to his home. Booster Gold decides to police Denver, Colorado. Kord, however, is dismayed in the breakup and was hoping that the team would continue to fight for "truth, justice and the American way" as the "Justice Riders." Kord receives sceptical stares from his allies. After they go their separate ways, departing Helldorado, Faust picks himself up and wonders if the machine town has a watering hole to quench his thirst.

Ted Kord finishes regaling writer Clark Kent with his adventures of the Justice Riders in order to sell his story to purchase materials for a new schooner. Though Kent decides to leave out the extraterrestrial element before aenquiring if there are any other adventures with the Justice Riders. Kord responds that there aren't, however, with Kent's writing talents, the Justice Riders could continue to ride together as legends.

Retrieved from "https://dc.fandom.com/wiki/Justice_Riders?oldid=2761479"
Community content is available under CC-BY-SA unless otherwise noted.