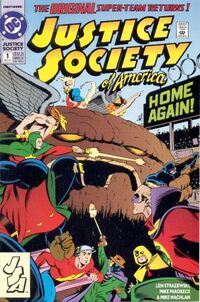 Justice Society of America (volume 2) was a ten-issue series that followed their return from the never-ending Ragnarok cycle and their fight with Abraxis in Armageddon: Inferno. In this series, they meet again with their fellow All-Star Squadron member Johnny Chambers (Johnny Quick), whose daughter Jesse is following in the footsteps of her father even after his divorce from his wife Libby Lawrence (Liberty Belle). Johnny helps Rex Tyler kick the Miraclo habit that he's been so dependent on through vitamin treatments and self-hypnosis where he is able to activate the metagene that gives him his Hourman powers and abilities. Johnny Thunder discovers that his adopted daughter Peachy Pet now has a successful frozen yogurt franchise, but much to his dismay, he also discovers that the island of Bahdnesia no longer has a single surviving native Bahdnesian save for a young female orphan named Kikku. During the series' run, the Justice Society also run into various modern-day heroes such as Superman, the Wally West version of the Flash, and Guy Gardner during his time wielding Sinestro's yellow power ring.

Retrieved from "https://dc.fandom.com/wiki/Justice_Society_of_America_Vol_2?oldid=2045087"
Community content is available under CC-BY-SA unless otherwise noted.