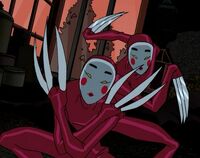 The Kabuki Twins are two female Japanese bodyguards employed by the Penguin. They are both highly skilled martial arts combatants, who employ extended steel razor blades at the tips of their fingers. Very little is known about the Kabuki Twins other than that they came into the Penguin's employ during a sojourn in the Orient. Whether the bodyguards are actual twins or not has never been clearly established.

Retrieved from "https://dc.fandom.com/wiki/Kabuki_Twins_(The_Batman)?oldid=599224"
Community content is available under CC-BY-SA unless otherwise noted.