Subject One is Kal-El, an alien foundling captured by the US Government.

In an effort to save his mother's life from the Reverse-Flash, Barry Allen unknowingly changes reality, creating a new world in which his friends' lives, Superman included, are drastically different.

In this new world, Kal-El's rocket crashes directly in Metropolis instead of Smallville, with the resulting impact causing several deaths.[1] The government takes custody of Kal-El and initiates Project Superman, a military project with the sole purpose of creating a supersoldier that could be used against America's enemies. Kal is designated as Subject One.

In the cold and harsh environment of the project's labs, Kal grows to become a solitary and very thin boy who has difficulty getting close to people. Kal's only sources of love and companionship are General Sam Lane, who loves him as the son he never had, and Krypto, who is designated as Subject Two.

Kal is then contacted by Subject Zero, the very first person inducted into Project Superman. Having obtained superpowers from the experiments, Zero talks to Kal in a volume only he can hear. Zero trains Kal in the use of his powers, including x-ray vision, as three years pass.

Kal witnesses as Lionel Luthor and his son Lex visit the project labs. However, Zero unleashes Two on the Luthors, forcing the soldiers to kill him, much to Kal's grief. However, Kal manages to reach Zero's chamber and destroys the lock with his heat vision, unleashing Zero.

As Zero wreaks havoc across the base, Kal returns to General Lane's office, where he meets Lois, General Lane's daughter. Kal and Lois, intrigued by each other, try to reach for the other's hands when Zero comes in. Zero tries to kill Lois as revenge for the experiments her father conducted on him, but Kal defends her. Zero, thanking Kal for letting him escape, tries to kill them both, but General Lane appears with a harness that seals them both in the Phantom Zone.

Later, General Nathaniel Adam takes over Project Superman, imposing a more strict schedule on Kal. Returning to his cell, Kal uses his heat vision to draw a picture of Lois in the glass.[2] 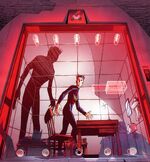 In the Flashpoint world, Kal-El was found and raised by the U.S. government.

Kal would reach maturity in his time in Project Superman. The Flash, Batman and Cyborg planned to free Kal from his cell so that he could join them in their mission to stop the war between the Amazons and the Atlanteans and return the timestream to normal. They manage to free Kal, exposing him to yellow sunlight. However, Kal, remembering Lois, flies away from the three heroes and goes to England. Also, Kal's release from the project labs had also destroyed the power source that kept Zero in the Phantom Zone, allowing Zero to break free.[3]

As Kal reaches England, he finds that Lois is being attacked by the Amazons. He quickly saves her and tells her that they must go somewhere safe from Subject Zero. Lois tells him she can't leave, as she must stay and end the war. Suddenly, Zero reaches England and attacks them. Kal and Zero fight, with Lois standing in the middle. A group of Amazons try to intervene, but Zero kills them.

Lois tells Kal that he must escape from Zero, but Kal refuses, remembering that General Lane told them that they must protect people from monsters like Zero. Kal continues the battle with Zero, noticing that the energy Zero absorbed from his dead opponents is causing his body to overload. Taking advantage of this, Kal punches Zero in the torso and destroys him in a massive explosion. Unfortunately, Lois is injured in the blast and Kal cradles her in his arms. Lois dies from her injuries, but not before telling Kal to save the people. Mourning her death, Kal decides to be a Superman.[4]

In the final battle of the Amazon-Atlantean war, Kal crushes the Enchantress, and then he fights Wonder Woman and Emperor Aquaman. However, the Flash manages to change reality again, creating a new world and allowing his friends to live their lives once again, but in a new way.[5]

Kal is one of the many heroes that were in Gotham City when it was domed and taken to the Blood Moon by Brainiac. A year later, Telos opens the domes and pits each world against one another. Kal is in attendance in Thomas Wayne's decision to prepare for war. He disagrees with Captain Thunder's insistence to strike first in order to win but is shut down by both him and Cyborg who insist that Kal doesn't know how lethal this fight can get.

Kal discovers Lois Lane within the Pre-Flashpoint Gotham City and believes that his Lois Lane has returned and flies off to get her, briefly encountering another version of himself. He finds Lois who tries to explain that she isn't the Lois from his world but he ignores her, declaring that he will save her.[6] When he discovered that Lois is pregnant and in labor, Kal took her to the Batcave and requesting a bewildered Thomas Wayne to help deliver the baby. But soon after, Kal was easily defeated by his Pre-Flashpoint counterpart who came searching for his wife.[7]

Retrieved from "https://dc.fandom.com/wiki/Kal-El_(Flashpoint_Timeline)?oldid=2762528"
Community content is available under CC-BY-SA unless otherwise noted.