Superman is Earth's premiere superhero and the stalwart protector of Metropolis.

Born Kal-El on the distant planet Krypton, he was sent to Earth as a child to survive Krypton's destruction. Raised with high moral ideals, he uses his extraordinary superpowers to fight evil and protect the innocent. In his civilian identity he is Clark Kent, a mild-mannered reporter working for the Daily Planet in Metropolis. 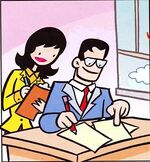 Superman's heroic actions earned the attention of fellow reporter Lois Lane. Although Superman kept his identity hidden from her, Lois eventually found out the truth in time but waited for Superman to come clean on his own. Clark and Lois harbored feelings for one another, and when Clark revealed his secret identity, they started a relationship. 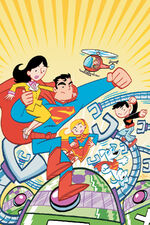 Superman, Superboy and Supergirl became known as the Superman Family for their collective efforts in protecting Metropolis. Their greatest adversary was Lex Luthor. In time, the Superman Family confronted various foes hailing from Krypton, such as the renegade A.I. Brainiac and an old enemy of the House of El, General Zod.

But as his list of enemies grew, Superman meet several individuals whom he would come to consider staunch allies: Batman, Wonder Woman, Steel, Green Lantern, The Flash and Aquaman. 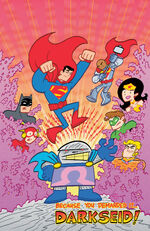 In time, Superman and his friends discovered his parents, Jor-El and Lara, were not killed in Krypton's destruction. They had survived and were trapped in the Phantom Zone. Superman was able to free them from the Phantom Zone, but Brainiac seized the opportunity to steal the city of Kandor from the Fortress of Solitude and formed the planet New Krypton in the other side of the sun.

Superman and his friends were last seen in conflict with the galactic conqueror Darkseid, who attempted to crash a huge meteor into Earth. The Justice League foiled his plans and celebrated their victory with a huge dinner at the Kent Farm.

Retrieved from "https://dc.fandom.com/wiki/Kal-El_(Tiny_Titans)?oldid=2776824"
Community content is available under CC-BY-SA unless otherwise noted.