The House of Il is the house of strength. So you'd better not fail me.

Kal-Il is Ultraman, the last son of Krypton from Earth 3 and the leader of the Crime Syndicate.

Kal-Il was born on the dying planet of Krypton that, through the machinations of his maniacal father Jor-Il, had caught the attention of its destroyer - the Anti-Monitor. Performing a shooting spree through a research lab, Jor-Il was able to secure a life pod for his only son, whom he regarded as his best chance of revenge.

Rocketing to Earth, Kal-Il was inundated with ideology and moralizing inside his rocket, warning him to be the strongest possible being, eschewing all weakness in himself and in others. His rocket crash-landed in Smallville, Kansas, right through the home of the dysfunctional couple Johnny and Martha Kent. Kal-Il gained power from the pieces of his home planet that landed with him and forced the couple to be his parents, staying with them until he was seven years old, at which point he killed them and burned their farm to the ground.

Over the following years, Kal-Il took the name Ultraman and began his pursuits of taking over Earth by murdering the President of the United States and forming the Crime Syndicate. During this time, Ultraman had a dysfunctional relationship with his teammate Superwoman. Unknown to him, Superwoman had a secret affair with Owlman.

Unfortunately for Ultraman and the Crime Syndicate, their stranglehold over the planet was pried loose by the arrival of the being that had destroyed Krypton, who also sought to destroy the Earth.[1] As their world began to crumble beneath them, the fabric between universes was weakened by the actions of another powerful being in another universe, allowing the Syndicate to escape in a dimensional rift. However, they were trapped in interdimensional Limbo for five years, with only the Outsider and Atomica successfully crossing through. 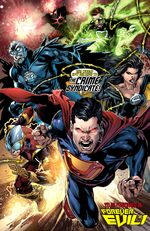 In a plot to free his masters, the Outsider manipulated the new dimension's heroes into giving him access to Pandora's Box, freeing Ultraman and the Syndicate from their interimensional prison and unleashing them onto the new Earth.

After disposing of the Justice League and their allies, the Crime Syndicate declared this new Earth their's and invited the world's villains to share in their rule. Noticing the rising sun - its light a weakness of his, Ultraman moved the moon to create a perpetual eclipse.[2]

On his way to Kahndaq to stop an insurrection, Ultraman took a detour to The Daily Planet where he discovered this world's version of his wife Lois Lane. Having confessed he had wanted to leave Superwoman for a long time but kept her as a suitable vehicle for bearing his child, he prepared to force himself on Lois before being ambushed by Black Adam.[3] Though they dueled, Ultraman defeated Adam and broke his jaw.

When Ultraman finally made it to Kahndaq, he forcefully took Metallo's Kryptonite heart, killing him, to strengthen himself. Ultraman talked with Superwoman, who revealed that she was pregnant and that she had also overhead Owlman's plan to betray him. Though his wife encouraged him to be strong for their unborn child, Ultraman assured her he only needed to be strong for himself. [4] 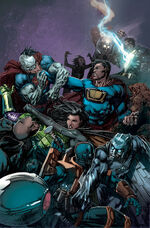 When Power Ring was killed by Sinestro, his ring sent vibrations through the Multiverse which drew the attention of the one who destroyed the Syndicate's world, prompting Ultraman and his team to prepare in anticipation of the incoming threat.[5] As they were distracted, the Injustice League, led by Lex Luthor took the opportunity to attack them and inadvertently freed the Syndicate's prisoner from their Earth Alexander Luthor, who intended to kill the Crime Syndicate.[6]

As the surviving members of the Syndicate tried to stop the now free Mazahs, Superwoman chose this time to reveal to her teammates that she had been working with Mazahs the entire time, as he was her lover and the real father of her unborn child. Ultraman, enraged, fought Mazahs, regretting having not killed him when he had the chance before tiring from lack of Kryptonite.

When Mazahs and the rest of the Syndicate were defeated by the Injustice League, Ultraman returned and attacked Lex Luthor, nearly killing him, but was weakened when Sinestro and Black Adam moved the moon back into rotation and exposed Ultraman to sunlight. Lex, now with an upper hand, defeated and humiliated Ultraman, who begged Lex to kill him. Lex refused, forcing Ultraman to live with the fact that he was the weakest man on the planet. Ultraman was then imprisoned by the Justice League, having been restored to power.[7]

Ultraman was later set free from his imprisonment by the combined efforts of Cyborg and Power Ring, (who had both been possessed by Grid and Volthoom, respectively), to enlist his help in defeating Mobius, the Anti-Monitor, who was the same being that destroyed Ultraman's Krypton and universe.[8] In the penultimate fight, Ultraman viciously assaulted Mobius, landing several punches, but was vaporized with a concentrated blast of antimatter, killing him.[9]

Ultraman and the rest of Earth 3 was resurrected in the multiverse when it decided to heal itself as to how it thought Earth 3 should be. Witnessing the Symbol of Doom in the sky on their Earth, the Crime Syndicate learned about Perpetua and started a mass-slaughter to gain her notice, with Ultraman himself encouraging the bloodshed. Their plan was successful as they gained an audience and she directed them to lead their people, who had been turned into Apex Predators, as part of her army.[10]

Earth 0's John Stewart, Superman of Earth 23 and Wonder Woman of Earth 6 struck Earth 3 to destroy the tuning fork powering her with Anti-Crisis Energy, after she had taken over the multiverse. As Ultraman and Superwoman fought the defeated John Stewart's allies, Owlman decided to betray his team, since he was already upset at the evil Batmen from the Dark Multiverse taking over Earth 0 and was hesitant at what Perpetua will do when remaking the multiverse. Using a gun made at Qward, he killed both Ultraman and Superwoman.[11]

Retrieved from "https://dc.fandom.com/wiki/Kal-Il_(Earth_3)?oldid=2797740"
Community content is available under CC-BY-SA unless otherwise noted.