On Earth-Two, Superman was born Kal-L, son of Jor-L and Lora on the doomed planet Krypton. When Kal-L was just a baby, his parents sent him away, moments before the planet's destruction. He landed on Earth, where he would take up the civilian identity of Clark Kent and fight crime as the Man of Steel, Superman. First a reporter and then the editor or the Daily Star, Clark Kent was happily married with Lois Lane. After his native world was destroyed in the Crisis on Infinite Earths, he lived in a pocket dimension with his wife and Alexander Luthor, Jr..

The Golden Age Superman first appeared in Action Comics #1 (1938), and was created by Jerry Siegel and Joe Shuster. He died in Infinite Crisis #7 (2006) in a fight with Superboy-Prime.

Kal-El
Earth 2
Based on Kal-L 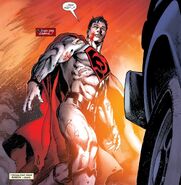 Tom Turbine
DCAU
Based on Kal-L 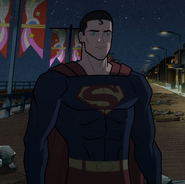