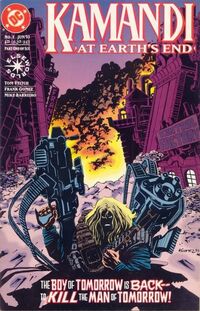 Kamandi: At Earth's End was a six-issue limited series published from June until November of 1993 under DC's Elseworlds imprint. Taking place in a far-flung future separate from that of the mainstream DC universe (as well as Kamandi's canonical reality), the title featured an aging Kamandi teaming up with the Man of Steel – Superman.

Retrieved from "https://dc.fandom.com/wiki/Kamandi:_At_Earth%27s_End_Vol_1?oldid=2066869"
Community content is available under CC-BY-SA unless otherwise noted.