Feeling the sting of the blade and seeing my own blood is comforting. It lets me know I'm not losing my mind...

Katar Hol, better known as the superhero Hawkman, was the adopted son of the King of Thanagar and lover of Shayera, the Princess of Thanagar. After accidentally killing his adopted brother Corsar, he fled Thanagar and crash landed on Earth.

Katar was once a minor noble on the planet Thanagar who "offended one of his betters" and was condemned to Thanagar's Gladitorial Arena. His fame as a gladiator spread and he soon got adopted by the King of Thanagar. After Thanagar's enemies poisoned the King and robbed the Thanagarians of their wings, Katar's adopted brother Corsar ascended to the throne. Corsar decided to mine the mysterious Nth metal in order to help the Thanagarians win the war. Katar opposed this due to the poor treatment the workers were getting. The two fought and when the Nth metal bonded to Katar, he accidentally killed Corsar. Shayera, the Princess of Thanagar, lover of Katar and sister to Corsar tried to capture Katar but he fled. He eventually crashed on Earth where he was found by the Coast Guard. When they asked for his name he said "Katar Hol" before going unconscious. They mistook his saying for "Carter Hall". The US government gave papers to Katar Hol, where he then went to college to study archaeology. He soon met a woman named Emma Ziegler and he became a archaeologist under her father.

The Nth metal still was bonded to Katar and he became a vigilante under the name of Hawkman. At some point he tried to give up the mantle of Hawkman. But when an alien called Morphicius threatened New York City with a plague, Hawkman was forced to return to action[1] and defeat the alien.[2]

Hawkman was eventually contacted by Amanda Waller to join a superhero team she was putting together called the Justice League of America that, unknown to the recruits, was meant to serve as a government-sponsored counter to the real Justice League if the team ever went rogue. Hawkman was chosen as a foil for Aquaman.[3] Alongside Martian Manhunter, Hawkman acted as one of the team's heavy hitters. Though he didnt really trust Amanda Waller and Steve Trevor at first, he eventually did. Seeing how working in a team could help improve himself as a warrior.

After the breakdown of the Justice League United, Hawkman decided to return to Thanagar and decided to work as a police officer back home, tired of life on Earth. However, Hawkman found it difficult to work inside the rules of a police officer and was constantly reprimanded by his superiors. Hawkman was partnered with the Thanagarian officer Rayn Kral who, despite being an honest cop, was loyal to his partner even when Hol flew off the handle.[4] 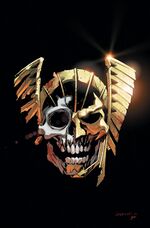 When Despero put a plan into action to collect all the Nth Metal in the universe to take over the galaxy, he set his sights on Thanagar, known for mining it. In order to distract the citizens of the planet long enough to rob them blind, Despero initated a war between Thanagar and their neighbor planet Rann, adopted world of the human space traveler and former Hawkman's former Justice League United comrade Adam Strange. When Strange became suspicious of the cause of the war between the two planets, he contacted Hawkman, and the two sought clues to discover Despero's plan.

Furious that Despero had successfully blown up a Thanagarian mining moon, causing the deaths of thousands, [5] Hawkman and Strange eventually came to blows with Despero himself, who had now accessed almost all of the Nth Metal Thanagar had controlled and was wearing it to fight them.[6] Realizing the only way to stop Despero was to kill him, Hawkman ordered Strange to activate a machine that would magnetize all the Nth Metal in the area, ripping Hawkman to his death but also killing Despero in the process. Katar Hol was posthumously honored with a statue on his home planet for his sacrifice to save Thanagar.[7]

Retrieved from "https://dc.fandom.com/wiki/Katar_Hol_(Prime_Earth)?oldid=2879026"
Community content is available under CC-BY-SA unless otherwise noted.