There always has been and always will be only one Batwoman-- and retired or not, it's you!

Kathy Kane was a wealthy heiress who gained great acrobatic skills during her career as a circus trapeze artist and stunt cyclist. Becoming infatuated with the Batman, she fashioned herself a costume and secret hide-out and started operating as Batwoman. At first she upstaged Batman and his sidekick Robin in capturing crooks. However, Batman eventually learned her true identity and tracked her to her secret cave hide-out. Showing her how easily it was for him to learn her identity, Batman pointed out that criminals could probably do it just as easily and tried to convince her to drop out of crime fighting.[3] Disobeying Batman's advice, she tried to capture mobster Curt Briggs. During this caper, Batman went missing and Briggs, struck with amnesia, left thinking he was Batman. Ultimately the real Batman reappeared, and Biggs was turned over to the police. Afterwards, Batwoman went back to retirement.[4]

However, Kathy Kane became tired of the dull life of a rich heiress and came out of retirement once more in order to recapture a criminal named Elton Cragg. It was during this case that Batwoman gained super-powers and after her heroic deeds, she convinced Batman to let her continue her crime-fighting career.[5] Ironically, around this time, Kathy started dating Bruce Wayne and she started to fall in love with Batman, unaware that they were the same person.

Member of the Bat-Family 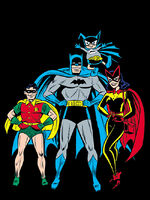 When Bruce Wayne was framed for a crime he didn't commit, Batwoman teamed-up with Robin in order to clear Batman's name.[6] During an undercover mission, Batwoman was captured by a criminal leader and was rescued by the Dynamic Duo.[7] When both Batwoman and reporter Vicki Vale were nominated Gotham City's "Woman of the Year", both tried to upstage each other to get the lead in the contest. With the help of Batman and Robin, both Vicki and Batwoman captured Moose Molloy's gang and both were crowned woman of the year.[8] When Batman and Robin were trapped in a cave in, Ace the Bat-Hound guided Batwoman to help free them and capture the criminal Dr. Midas.[9]

Batwoman next helped the Dynamic Duo capture Firefly,[10] aided them in preventing Lex Luthor from atomizing Superman,[11] and helped them capture the Spinner.[12] Batwoman later met with Bat-Mite and working together, they captured some crooks to save the Dynamic Duo.[13] After this adventure, Bat-Mite became infatuated with Batwoman and tried to become her sidekick, creating chaos for everyone until he realized his mistake and left.[14]

When trying to solve the mystery of who murdered Professor Lacy after his discovery of a living caveman, Batwoman was saved by the caveman who sacrificed himself to save her from Lacy's killer: Harbin, Lacy's assistant[15]. When Kathy Kane purchased a mystical belt, she becames a target of the criminal Star-Man. The belt sucked Batwoman's life energy from her body and she was saved by Batman and Robin, who arrived in time to stop Star-Man.[16]

When Kathy's niece Betty Kane came to visit her, the young girl learned of her aunt's double identity. Kathy agreed to train Betty to be her sidekick, thinking that the young girl would eventually lose interest. However, to her surprise, Betty proved capable and became Batwoman's sidekick Bat-Girl. On their first mission, the two women helped Batman and Robin defeat King Cobra and his gang.[17] Batwoman then became a victim of Luthor's experiments, who manipulated Kathy and gave her super-powers to fight her allies. After a long struggle, Superman managed to break Lex's control over Kathy and she returned to normal.[18] When Batman and Robin were briefly transformed into alien creatures, Batwoman was one of the few who actually believed they were the real Dynamic Duo, until they were restored to normal.[19] She later helped Batman and Robin capture the "Rockets" Rogan Gang.[20]

Later, after Batman and Batwoman were captured by the Moth, they were rescued by Bat-Girl and Robin.[21] Later, Kathy went on a date with Bruce Wayne to an amusement park that was previously the location where the Justice League of America recently had a battle.[22] As Batwoman, Kathy joined Batman on a trip to Washington D.C. to testify to the Senate Committee, leaving their young sidekicks to defend Gotham City in their absence.[23] She next aided Batman and Robin in capturing the criminal known as the Vulcan.[24]

Kathy's romances with Bruce Wayne and Batman became rocky, first during a period where Bruce Wayne was briefly transformed into a child, he made it appear that he's seeing another woman in order to keep Kathy away,[25] and later when Batman, while under the effect of a love potion, fell in love with a woman named Elsie.[26] Kate's romance woes became more complicate when Alpha, the Experimental Man fell in love with her, until the artificial man sacrificed himself to save her from falling off a cliff.[27]

When helping Batman and Robin solve a murder during Mardis Gras, she got into a feud with Vicki Vale over who is the right person for Batman, forming the first of many competitions for Batman's affections.[28] She later helped Batman capture Catman.[29] When she and Batman were briefly transported to another dimension by invaders from that world, their mortality was in question unless they were freed. During this period, Batwoman managed to get Batman to warm up and admit some of his feelings toward her before they were rescued by Robin and Bat-Girl.[30] Batwoman's feud with Vicki Vale heat up again when both women tried to determine if Mirror Man's assertions that Bruce Wayne was really Batman were true.[31]

When Batman scolded Batwoman for getting in the way of his attempts to capture Catman, she faked her intentions to join the criminal as Cat-Woman, until Catman seemingly died in the battle.[1] Batwoman and Bat-Girl later helped the Dynamic Duo end a feud between the Joker and Clayface,[32] and helped Batman and Robin capture the Terrible Trio.[33]

Once more suspecting that Batman and Bruce Wayne are the same man, Kathy Kane was convinced otherwise when Superman posed as Batman. However the plan went awry when a bomb goes off seemingly killing "Batman" and necessitating Superman to pose as the ghost of Batman for a time.[34] When Batman was briefly transformed into a gigantic creature, Batwoman teamed-up with Robin and Ace the Bat-Hound to track down the crooks that have the cure.[35] After this, Catman reappeared and discovered his costume had mystical properties that gave him nine-lives, allowing him to continue on his crime spree. With her Cat-Woman costume, Batwoman helped Batman and Robin capture him.[36]

Following this adventure, Batwoman went into retirement and disappear from Batman's life almost entirely. She become the owner of a circus, but often longed to return to her former crime fighting career.

Batwoman came out of retirement to aid Batgirl against Killer Moth and the Cavalier, but her return was never intended to be permanent.[37] Kathy Kane was then present at a surprise party for Bruce Wayne at Wayne Manor.[38] When Batwoman was later disintegrated into nothingness on Barbara Gordon's doorstep, Batgirl and Robin teamed-up to find the cure and restore Batwoman to her normal form.[39] Shortly after this, Batwoman met the Huntress from Earth-Two and aided her and Batwoman in capturing Catwoman, Poison Ivy and Madame Zodiac.[40]

When the Freedom Fighters of Earth-X searched for a group of criminals known as the Warmakers, their search led them to the carnival owned by Kathy Kane. Kathy, as Batwoman, aided the Freedom Fighters and Batgirl in defeating the Warmakers[41][42]. In her last recorded adventure, Kathy Kane was murdered by the League of Assassins who were being manipulated by Ra's al Ghul. Her death was eventually avenged by Batman[43].

Due to the collapse of the Multiverse brought on by the Crisis on Infinite Earths, the Kathy Kane of Earth-One was erased from history. However following the events of Infinite Crisis the universe was restructured into a new multiverse. On New Earth a new incarnation of Kathy Kane existed, and created her own career as Batwoman.

There have been a number of imaginary tales of the Earth-One Batwoman. Most delving into what possibilities her brief romance with Batman would take her.

In one instance, Robin dreamt about Batman and Batwoman getting married, which was brought on by young Dick Grayson's fear that such an event would split them up as a team. In his dream, Batman revealed his secret identity to Kathy Kane and asked her to marry him. After they were married, he asked her to retire as Batwoman, bu Kathy refused. Ultimately, Kathy altered her costume to resemble Batman's and in a fight with crooks, her cowl was pulled off, exposing her true identity to the crooks and allowing them to deduce Batman's true identity. Robin was soon awoken from his dream before he could learn of the outcome of this situation.[44]

Retrieved from "https://dc.fandom.com/wiki/Katherine_Kane_(Earth-One)?oldid=2338184"
Community content is available under CC-BY-SA unless otherwise noted.