Kate Kane, alias Batwoman, is a Gotham City crime fighter who fights the Religion of Crime. A military brat thrust into high society after her father remarried a heiress, she was cast out of West Point after being outed; becoming Batwoman saved her from self-destruction.

Katherine "Kate" Kane, was born the daughter of Colonel Jacob Kane and Captain Gabi Kane. Her parents were both career military and worked extensively with military intelligence services.

Katherine grew up with her parents and her twin sister Elizabeth Kane. As her parents were promoted they moved to a wide variety of towns and bases. Her father was often away from home.

The Kane family moved from Fort Bragg, North Carolina to Brussels in Belgium, since her parents were now serving at NATO. The family was torn apart, however, due to a terrorist attack. Gabi was taking her daughters out for the day when they were kidnapped by heavily armed men from the Religion of Crime. Military intelligence eventually located the hostages, and Jacob was put in charge of the tactical unit that was sent to rescue them. However they were too late, as Gabi had been executed along with Elizabeth. Jacob rescued Kate himself, but she was traumatized by the sight of her dead mother and sister.[1]

Kate tried to please her father by entering the United States Military Academy. As a cadet, Kate excelled in all areas, eventually earning the rank of Brigade Executive Officer, as well as completing both Air Assault School and the U.S. Army Airborne School and earning prestigious awards like the RECONDO badge and the Superintendent's Award for Excellence.[2] She also roomed with Cadet Captain Sophie Moore, with whom she entered a lesbian relationship. Eventually, an anonymous accusation of homosexual conduct was brought against Kate, and her commanding officer inquired about it. She confirmed her sexual orientation, but protected Sophie. Per the Don't Ask, Don't Tell policy, she was discharged. Her father forgave her, and found it more important that she did not lie to save herself.

Jacob Kane eventually married weapons heiress Catherine Hamilton. This new wealth established Kate as a socialite in Gotham City's upper crust, and she became notorious for her partying and drinking.

One night after a party, she was pulled over by officer Renee Montoya. Instead of being fined for drink driving, the two entered a relationship. They broke up when, after an argument, Renee told Kate she had no direction in her life, no education, and no apparent goal. She found her purpose soon enough: when she was confronted by a mugger in an alleyway, she fought the man off, but was stopped by Batman before she could inflict serious injury.[2]

Seeing Batman in person made Kate realize that she could be a vigilante, too. For about six months, she conducted intelligence gathering and spent six additional month in the field before Jacob found out. Though initially angry with her, Jacob agreed to help her with her war on crime after she convinced him of her seriousness. With her father's help, she traveled all over the planet for two years learning how to fight. Her father used the family fortune and connections to provide her with experimental weaponry to use on her crusade.[3] 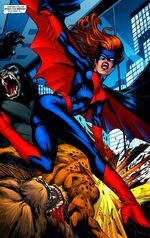 Batwoman during her early crime-fighting career

Renee encountered her old flame again when she was researching suspicious activity at a warehouse on 520 Kane Street for the Question. Renee crashed a party at Hamilton Manor, and Kate confirmed to her that her family owned the building. It was being leased by Ridge-Ferrick until six weeks earlier. Renee refused to tell Kate what was going on, saying that she didn't owe Kate anything, which shocked Kate and prompted her to tail them as Batwoman. When Renee and the Question broke into Ridge-Ferrick's Gotham offices, they were attacked by Whisper A'Daire's shapeshifting minions, and Batwoman arrived to rescue them. Making quick work of two monsters, Batwoman stopped Renee from shooting the third, instead kicking the monster out a window. Batwoman informed them the police were coming, asked that she not be mentioned, and left.

After Renee learned that the Book of Crime, a sacred text of Intergang, contained a prophecy foretelling the brutal murder of the "twice named daughter of Kane," she and the Question returned to Gotham. They contacted Kate by flashing a Bat-Signal, and the three joined forces to avert Intergang's plans. As Kate continued the case, she was joined by Nightwing, who had recently returned to Gotham and became infatuated with her (no doubt because of her resemblance to former Batgirl), though she assured him she wasn't his type. On Christmas Eve, he gave her an 'official' Batarang. She also celebrated Hanukkah with Renee, and the two kissed shortly before Christmas.

Intergang realized that the image of Batwoman in the Crime Bible and the cited "twice-named daughter of Cain" were one and the same, and ransacked Kate's apartment, kidnapping her with the intention to sacrifice her. Renee found her, seemingly too late to save her, as during the ensuing fight with Bruno Mannheim, Kate pulled the knife out of her own chest to stab Mannheim and then collapsed in Renee's arms. Kate survived her wounds after Renee used pseudoderm to patch up the wound and stop the bleeding, leaving Kate at the hospital in Renee's trench coat.

Batwoman came into contact with Renee Montoya again after Renee confronted Trickster and Pied Piper to question them about the murder of Bart Allen, having trailed them from Penguin's Iceberg Lounge nightclub.[4] Renee again left town, irritating Kate, though she agreed to help Renee in tracking down a copy of the Crime Bible, which was being sold via the Penguin. The book was actually part of the Lessons that the Order of Stone was attempting to teach Renee, and she and Kate fought over the book. In the end, Renee claimed she only wanted it to protect Kate. Kate told her that Renee never asked what Kate wanted, but she let her take the book.

During the Final Crisis, Kane was one of the millions who fell under the influence of the Anti-Life Equation[5], and became a member of the Female Furies.[6]

Battle for the Cowl and Investigations

After Batman's death during the Final Crisis, Batwoman joined the Network, a group of heroes that would keep order in Gotham in Batman's absence.[7] 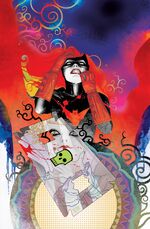 Kate had more altercations with the Religion of Crime, especially Whisper A'Daire, who believed the prophecy that Kate Kane was the twice-named daughter of Cain, who would need to be sacrificed in order to bury Gotham in flames. Batwoman thwarted these plans, with the help of a defector named Kyle Abbot, and Whisper was deposed.

However, the thirteen covens of the Religion of Crime were revived by a new leader named Alice, whose propensity for quoting Alice in Wonderland belied a sinister and callous disregard for human life, and a persistent obsession with Batwoman herself.[8] In an attempt to get answers, Kate dangled the woman over the edge of a rooftop, but rather than give up answers, Alice spat a poisoned razor-blade into Kate's face, causing hallucinations.[9]

Kate was saved by Kyle Abbot and a new sect of the Religion of Crime, who rejected the assumption that Batwoman was central to their doctrine. After recovering, rather than immediately seek revenge, Kate went to a charity ball for the Gotham City Police Department, where she met and began a relationship with Margaret Sawyer. They were interrupted by Kyle, who revealed in private that Alice intended to destroy Gotham by stealing military grade firepower. Given that her father had had to leave the party in order to investigate an emergency on base, Kate realized too late that the Religion of Crime was behind it. Alice had captured her father.[10]

With Kyle's help, Batwoman managed to board the plane from which Alice planned to unleash a toxic gas onto the city. In the fight that ensued, Alice was nearly knocked out of the plane, but Kate caught her in her hand. In a moment of uncharacteristic coherence, Alice looked up at Kate and stated "You have our father's eyes," before plunging a dagger into Kate's arm. In pain, Kate let go, and watched Alice fall to her death as the realization dawned on her that her twin sister Beth had not died all those years ago. As soon as she had regained her sister, she had lost her - and her father Jacob had betrayed her.[11]

When the Justice League of America split up following Bruce Wayne's death and a disastrous confrontation with the Shadow Cabinet, Green Lantern Hal Jordan led a group of superheroes to Gotham in order to track down the supervillain known as Prometheus. Kate began stalking the heroes from the rooftops after they encountered Clayface.[12]

Batwoman later contacted both Leagues at the JLA Watchtower, informing them she encountered and engaged supervillain Delores Winters, who mysteriously collapsed and died right as she was about to be taken into custody. The heroes requested that Kate bring the body up to them, but she declined, telling them that she was much too busy due to a rash of criminal uprisings going on in Gotham. Firestorm was then sent to retrieve the corpse from Kate and bring it to the team, who discovered that Dolores was forced into fighting by means of a mind control device.[13]

Later, Batwoman was kidnapped by cultists and taken to London in order for her to once again be sacrificed. She was sealed within a coffin and taken underground to the last remaining Lazarus Pit in order for the ritual to begin. She was saved by the timely intervention of Dick Grayson and British superheroes Knight and Squire. After learning that Grayson planned on placing Bruce Wayne's corpse into the pit in order to revive him, Kate strongly protested, but he simply ignored her.[14]

Sometime later, Batwoman was deployed to Argentina to help Batman and El Gaucho track down an old criminal genius named Dr. Daedalus. There, she encountered the British Special Agent known as the Hood. Together, the four heroes fought against El Gaucho's nemesis, Scorpiana, who was finally defeated by Batwoman. They then found an old man dressed in Dr. Daedalus' costume, but soon discovered he was only an old man with Alzheimer's. Soon after, Batwoman returned to Gotham.[15]

Retrieved from "https://dc.fandom.com/wiki/Katherine_Kane_(New_Earth)?oldid=2802140"
Community content is available under CC-BY-SA unless otherwise noted.