Yes, I did. How are you feeling? Katherine Kane (The New Order)

Kate Kane was the former hero Batwoman, an ally of Batman, before losing faith in vigilantism.

Instead, she retired and became a government official. After Nightwing activated a device in Metropolis to eradicate 90% of the world's super powers, Kate supported him and worked to get anti-super power actions passed through the government. However, after Grayson was chosen to be the leader of the anti-super power task for the Crusaders over her, Kane grew resentful of her former ally.

In the year 2040, after Grayson's son Jake showed signs of developing super powers, Kane went out of her way to have Jake and his father arrested, still holding a grudge. 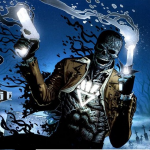