Sometimes I think a good fight accomplishes more than all the learning in the world.

Kent Nelson is Doctor Fate, a powerful sorcerer and agent for the Lords of Order who fights evil alongside his wife Inza. His amulet, cloak and helmet are creations of the ancient Nabu who acts as his mentor and spiritual guide. He is a founding member of the Justice Society of America.

Main article: Doctor Fate Origins
Kent Nelson was the son of archaeologist Sven Nelson and, around the year 1920, the two of them were exploring the Valley of Ur in Mesopotamia when they discovered an underground pyramid. It contained Nabu, an ancient immortal from the planet Cilia who had been held in suspended animation for thousands of years. Kent released him, but the lever accidentally unleashed a poisonous gas that killed his father. It would later be revealed that Nabu engineered this situation to gain a new host. Nabu decided to mentor the young boy in the secrets of the universe, giving him incredible powers through total molecular control and taking his grief away from him. He would serve as an agent of the Lords of Order in their never-ending battle against the Lords of Chaos. Having finished his training, Nabu gave him an amulet, cloak and helmet to become a champion of good as Doctor Fate.[1][2][3] Kent would go on adventures as Fate, although Nabu's spirit would always guide him through the helmet and he would awaken with little memory of his own exploits.[4] He would go on to meet a beautiful college student named Inza Cramer while traveling through Alexandria, and she would become his long-time romantic partner and confidante. His first battle was against the evil sorcerer Wotan, who struck at him through Inza using an agent named Thomas Frawley.[5][6][7]

Doctor Fate went on to fight evil threats with his powers along with Inza. Having locked Wotan for good,[8] Fate stopped Magno the Mighty,[9] he recovered and destroyed the Lost Book of Toth,[10] defeated two species of evil space men,[11][12] and stopped the Norns.[13]

Kent Nelson became dissatisfied with his current situation and he decided to become a real medical doctor in order to save more lives.[24] Shortly afterwards, Kent became engaged to his faithful companion, Inza and they spent more time together.[25]

Early in his career, Dr. Fate's first encounter with a hero of that era was the Spectre, the wrath of God. Together they destroyed a military gateway to a netherworld of demons.[26] It was World War II and America was pulled into the war, Dr. Fate and many other mystery men help defeat an assassination attempt of President Roosevelt's life. At Roosevelt's request, they formed the Justice Society of America.[27]

During this time, Kent found the helmet becoming more and more possessive of him, so rather than abandoning his battle against chaos, Kent created the half helm. Although Kent's powers were severely limited, he still had the ability of flight, invulnerability and super strength.[28][29] However, Kent donned the helmet one last time in order to find the missing Spectre. Dr. Fate discovered that the Spectre was under the control of Kulak and in a titanic battle with the Spectre, he was defeated and the Helmet of Nabu was lost somewhere in the netherverse. It would not be until the early 1960s that Kent Nelson would somehow recover the helmet of Nabu and become Dr. Fate again. In the early 1950s Kent Nelson had retired his fate persona and became a physician, but some time later he had recovered the Helmet of Nabu under never explained events, and in 1955 he fought Khalis, the mad Egyptian priest who once used his Amulet of Anubis.[4] It was not until the 1963 that Kent would rejoin the Justice Society of America[30]. As their Justice Society comrades aged, Kent and Inza seemed immortal. The magic fate held over them, virtually stopped their aging process. Inza and Kent also received a small portion of Ian Karkull's power which gave them even more vitality.

Little is known of Fate's adventures during this period save for the JSA's annual gatherings with the Justice League of America from the parallel world of Earth-One (the JSA being on Earth-Two), and a pair of adventures he shared with fellow JSA member Hourman facing the monstrous Solomon Grundy and the villainous Psycho-Pirate.[31] 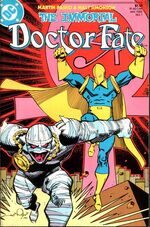 After an encounter with both Flashes from Earth-One and Two,[32] Doctor Fate tried to stop the threat of a Lord of Chaos released upon Earth.[33][34] Unfortunately, the Lord of Chaos took hold of Inza and used her against Fate, to weaken his powers and eliminate his resistance.[35] Although Fate was almost beaten, he managed to defeat the Lord of Chaos and restored the damage created, all thanks to his drive and determination to save Inza.[36] This wouldn't be Fate's last encounter with Lords of Chaos, as he was soon sent to a strange dimension, where he had to confront Vandaemeon.[37][38] Unable to beat the Lord of Chaos, Fate returned defeated, only to find that Inza had left him. Fate soon understood that this was all a plan to break him and the mastermind behind it all was a renegade Lord of Order called Ynar,[39] who allied himself with Vandaemon in order to take over the universe. Fate was helpless against their combined forces, but thanks to Inza's sudden return, he merged the consciousness of the Kents together inside the Helmet of Nabu, giving him enough power to defeat the Lords of Order and Chaos. After a successful battle, Kent and Inza realized their deep love for each other and started working to improve their relationship.[40]

Later, Dr. Fate became a founding member of the new Justice League and the heroes foiled the plans of Darkseid to turn the people of earth against heroes.[41] Kent's last adventure with the League was against the Gray Man.[42] At the end of that case, Fate retired into space to meditate on the situation.[43] 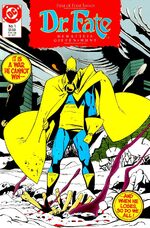 During the late 1980s chaos and order were at breaking point. It was the Kali Yuga, the final age of man. Order had pulled out of battle, waiting for Chaos to engulf itself to create the new Golden Age. The strain of the Kali Yuga on Kent and Inza had caused them both to age rapidly. The strain on Inza was unbearable, in 1987, Inza committed suicide which left Kent devastated and on the verge of suicide.[44] Nabu had become more dominant in the relationship and would not allow Kent to die until he could find a new host body.

Kent reluctantly helped Nabu find Eric Strauss as his protegee as the new Fate. It was only during this short time that Kent discovered that Doctor Fate was meant to be the result of the merging of two humans with a mystical bond, much like his bond with Inza. Kent convinced Nabu to allow Eric Strauss and his human bond, Linda to become the new Doctor Fate. Afterwards, Kent requested to die and Nabu allowed Kent to pass away.[45]

The Nelsons enjoyed an afterlife in which they lived normal lives unknowingly in the Amulet of Anubis. They raised a child called Kent and once again Fate would play a role in their lives again.

In desperation, Nabu travels to the Tower of Fate in Salem, to prepare the way for the TRUE Dr. Fate, Kent and Inza Nelson. As the they look into the amulet of Anubis, they see the souls of Kent and Inza Nelson. Jack C. Small and Petey venture into the amulet to find the Nelsons while Linda and Nabu prepare to fight Benjamin Stoner. With Nabu's help, Linda can touch the items and become Fate with Nabu. Nabu and Linda create a four armed Dr. Fate to battle the Anti-Fate. However, they fail and the Anti-Fate rejects the Lords of Chaos. Within the amulet, Jack C. Small and Petey discover that Hesse is inside the amulet. With his help they find the Nelsons and try to persuade them to come back to earth. Inza called this world heaven as the Nelson's could live the life they wanted to live. In this world, they even had a son called Kent junior. Inza does not want to leave this so-called heaven but eventually agrees that they could make this life happen on Earth.

Linda dies from her wounds from the battle with the Anti-Fate as her soul goes into Wendy, a woman who just recently died. There she is rejoined with her husband Eugene (Eric) and their daughter Raina where they will become the new seeds of humanity. Nabu is given the choice between humanity and being an immortal Lord of Order, he chooses humanity and his soul goes into Wendy's unborn child. Kent Nelson & Inza Nelson become the new Doctor Fate.

In 1994, Dr. Fate was once again formed into the male Dr. Fate but under the control of Kent and Inza. During Zero Hour, Dr. Fate led the Justice Society on its last battle against Extant, a minion of Parallax. Extant defeated the JSA and as he had the power of both a Lord of Order and Chaos, he forced the split of Dr. Fate, flinging the helmet and amulet through the netherverse which would eventually return to Egypt, a nexus of Fate's power.[46] Kent and Inza tried to recover the items of Fate from Jared Stevens, a mercenary who would later become the new Fate. The items rejected Kent and Inza and the Nelsons chose Jared Stevens as the new holder of Fate.[47] After a deadly battle with the servants of the demon Kingdom, the Nelsons were killed and were eventually allowed into the afterlife yet again.[48] Kent and Inza did not die after giving the items to Jared Stevens but became disembodied spirits seemingly existing in a pocket universe inside Fate's amulet.[49]

His current fate was unknown until Kent was re-animated as a Black Lantern, and then being destroyed in New York City as the JSA's bomb went off.[50]

When Hal Jordan was injured on a distant planet, and the energy of his ring is almost exhausted, it is revealed that a fraction of the original Doctor Fate was inside his ring. When Fate and Jordan shaken hands years ago, Fate set a fraction of himself, traveling through time, within the ring in the current times. Fate had only enough power to sustain him and Jordan, then return to his body in his own time, passing along what he had learned there. The two begin to discuss whether Fate should use his energy to save Jordan. Because it was never known the cause of Fate losing his immortality, maybe this very spell Fate used was the real reason. Even having the chance to be able to change his own destiny, Fate chooses to help Jordan to escape from that planet.[43]

In their initial years of publication, the Fate's abilities were described as "the secret of the conversion of energy in matter and matter in energy". In the current continuity, the greater part of Doctor Fate's powers come from the mystical Helmet of Fate. However, Kent Nelson has trained throughout his career to become an accomplished adventurer as well as amassing his own personal sorcery skills.

Without his helm, Kent Nelson has only the following magical abilities:

Retrieved from "https://dc.fandom.com/wiki/Kent_Nelson_(New_Earth)?oldid=2657575"
Community content is available under CC-BY-SA unless otherwise noted.