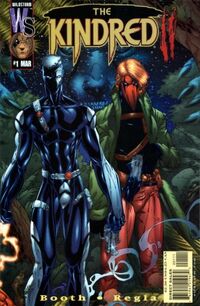 The Kindred II was a four-issue limited series published by WildStorm Productions, an imprint of DC Comics. The series featured the former Image Comics heroes Grifter and Backlash and their second battle against the Kindred in a story called "Bloodlines" (not to be confused with the DC Universe "Bloodlines" crossover.

Retrieved from "https://dc.fandom.com/wiki/Kindred_Vol_2?oldid=1267276"
Community content is available under CC-BY-SA unless otherwise noted.