This page contains information about Kingdom Come (Volume 1) . Kingdom Come was a four-issue limited series published from May until August of 1996 under DC's Elseworlds imprint. Like all Elseworlds, this series was set in an alternate reality outside that of t 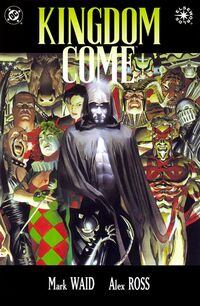 Kingdom Come was a four-issue limited series published from May until August of 1996 under DC's Elseworlds imprint. Like all Elseworlds, this series was set in an alternate reality outside that of the mainstream DC Universe. The series was written by Mark Waid with fully painted illustrations and covers by Alex Ross. All four issues were collected in both softcover and hardcover editions as well as a slipcase Absolute Edition.

The setting for Kingdom Come took place some twenty years into the future of the year that it began publication. The older, more established super-heroes had gone into retirement, giving rise to a new generation of anti-heroes, who did not uphold the same noble values as their predecessors. Waid and Ross wrote Kingdom Come as an indictment against the growing trend of violent anti-hero archetypes that had sprung out of the early 1990s, many of whom, were created by DC's independent rival company Image Comics. The reality of Kingdom Come was re-introduced in 2006 as one of fifty-two parallel worlds in the recreated Multiverse. The Kingdom Come reality was designated Earth-22 (albeit with a few minor differences).

Kingdom Come spawned two sequels, the first of which was a two-issue limited series titled The Kingdom, which also generated five satellite one-shot specials. In 2007-08, the storyline "Thy Kingdom Come" was introduced in the pages of Justice Society of America (Volume 3). Although hailed as an official sequel to Kingdom Come, "Thy Kingdom Come" actually pertained to the re-imagined Earth-22 reality.

The popularity of the Kingdom Come mythos also spawned a set of trading cards produced by Fleer/Skybox as well as an action figure line developed by DC Direct. Kingdom Come won the 1997 Will Eisner Comic Industry Awards for best limited series.

Retrieved from "https://dc.fandom.com/wiki/Kingdom_Come_Vol_1?oldid=2741412"
Community content is available under CC-BY-SA unless otherwise noted.