Knockout was a former Female Fury from Apokolips whose hidden identity was that of a super-strong stripper who worked at a club called the BoomBoom Room.

She first appeared shortly after Superboy moved to Hawaii.[2] Using her super strength, she fought and flirted with Superboy just for the fun of it.

Later, she was recruited to join Amanda Waller's Suicide Squad for an attack against the international crime cartel, Silicon Dragons. Knockout was presumably killed during the mission when she was left behind with King Shark and the base exploded.[3] She later turned up alive and joined Superboy in a fight against Valor (although she tussled with him as well during the fight)[4] She turned back up shortly thereafter and teamed up with Superboy, battling across Hawaii in several of his adventures.

Her past soon caught up with her, and it was revealed then that she was originally from Apokolips, one of Granny Goodness's Female Furies. After Big Barda ran off with Mister Miracle, Knockout decided she had had enough of the Furies. During a punishment where she was chained up on the walls of the Fire Pits, she broke her chains and leapt into the fires (after seeing Himon, whom she thought was a hallucination, do so). As she did so, a Boom Tube opened and took her to Hawaii.[5]

The other Female Furies arrived in Hawaii to reclaim Knockout; a huge battle ensued with Superboy, Knockout, and a small squad of police officers on one side and the Furies on the other. The Furies were only driven off when Dubbilex used his mental abilities to convince them that Knockout had died in the battle. The police discovered that the one police officer who was killed in the battle was actually struck down by Knockout, just because he was in her way, and attempted to bring her in; Superboy adamantly refused to believe she was guilty, causing the two to briefly go on the run.

The two encountered an explorer named Victor Volcanum. Knockout wanted Superboy to kill him and fully become her lapdog, but he refused, and Knockout decided to do the deed herself, revealing her true colors as last. Superboy managed to defeat her and bring her into custody.[6]

She was shown in maximum security a couple more times, but did not escape during the rest of the series' run.

At some point, Knockout finally managed to break loose, and joined up with the Society, as seen during Villains United. She was revealed to have joined the Society as a mole at the request of her lover, Scandal Savage, a member of the Secret Six.

After joining the Six, Knockout was nearly assassinated by minions hired by Vandal Savage, who wanted Scandal to produce an heir. While trying to root out the assassins, Knockout slept with Deadshot, and much to her confusion, this upset Scandal. After all, surviving warriors on Apokolips often did this after a battle. Knockout quickly figured out that Scandal was using her anger as an excuse, and came to help Scandal confront her father.

Reunited, Knockout continued with the Secret Six, having a knock-down, drag-out fight with Big Barda. They fought long after both sides called a truce and their fight ended in a tie, with Barda calling her "sister." 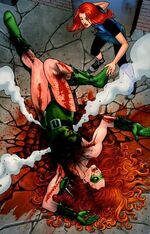 Shortly after her fight with Big Barda, the Secret Six disbanded. Scandal remained with Knockout and made a passing joke about the fight with Big Barda, saying that Barda won. While intended as a joke, Knockout took the comment seriously and went to Metropolis to have it out. On the way, she found someone else stalking Big Barda, and challenged the stalker to fight for the right of killing Barda.

The stalker turned out to be Infinity-Man, who was tracking and killing all the New Gods. Knockout realizes this too late, and attempts to flee. When she is caught, she asks to be allowed to say goodbye to Scandal; Infinity-Man denies her this last request, and her heart is ripped out before he throws her off the roof to her death.[7]

Knockout's soul was damned to Hell. While there, she was a shell of her former self. Ragdoll eventually traveled to Hell intending to use a stolen "Get Out of Hell Free" card in order to resurrect Parademon, but once there, he decided to stay. Promised to Ragdoll as his bride, Knockout was later freed from the deal after a skirmish with the rest of the Secret Six. Convinced of the Six's loyalty and friendship, Ragdoll decided to let them use the "Get Out of Hell Free" card he had stolen to return Knockout to life. Once returned, she was still in a haze, but seemed physically healthy.

Retrieved from "https://dc.fandom.com/wiki/Knockout_(New_Earth)?oldid=2827213"
Community content is available under CC-BY-SA unless otherwise noted.