You were everything to me, Clark. All I wanted was to live up to you.. to really feel like I earned the right to wear your symbol. How am I supposed to wear this "S" on my chest?

Kon-El, or better known as Conner Kent, is a half-human, half-kryptonian teenage clone of Superman and member of the Teen Titans.

After Superman was supposedly killed by Doomsday, Lex Luthor created multiple clones of him, one of which was Superboy, Conner Kent. In a fit of rage, Superman proceeded to destroy any remaining clones, though remained ecstatic to meet the young man. 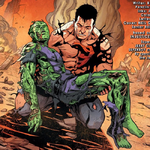 During the fateful day, Superboy was having a friendly game of tag with Kid Flash and Beast Boy. When the nuke was triggered, Bart was unknowingly running towards the center of the blast and was killed instantly, while the radiation killed Beast Boy despite Conner's vain attempt to shield his friend. He and the other Titans later hold a funeral for them and the other heroes that lost their lives.

After Superman started his brutal crusade against criminals after the destruction of Metropolis and the death of Lois, Superboy, alongside Red Robin, Wonder Girl and Starfire attempted to stop Superman with a Phantom Zone projector, however, Superman defeated him and left him mortally wounded. Superman then told the surviving Titans to get Superboy and themselves into Phantom Zone to save his life and to keep themselves from interfering with his plans, reluctantly, they complied and entered the Phantom Zone.

The Titans would remain in the prison more than six years until they were found by Plastic Man, who was sent to rescue them. As his heart was still punctured, only Superboy was left behind, with the others promising to find a way out for him.

After the death of Zod by the hands of Amazo, Superboy received a transplanted heart of the former Kryptonian General to his body. Only after his successful surgery did he learn of Tim's death at Zod's hands.

At the Fortitude of Solitude, Conner Kent continues to absorb solar energy to complete healing of the heart transplant he has just received. Cassie informs him of what happens in Delhi, and of course Superboy, even though he is not 100% yet and that Amazo was able to tear Zod's head off (although he was also weakened by his long time in the ghost zone), will not sit idly by.

But the Kents are not going to let the boy they also consider their son leave just like that. They consider that the world needs hope, and that the symbol of the "S" must be seen again as something that is on the side of good. So they have a gift for him; one of Superman's suits when he was younger and of Conner's height and measurements. Thus, Conner goes to Delhi wearing the uniform of the man of steel, and the world has again a Superman to fight for truth and justice.

Amazo only takes 5 minutes to attack Delhi and has already claimed 23,000 human lives and massive material damage. The Team Batman is transported to the place while Superboy, Starfire, Wonder Girl and Steel fly at full speed to join them in the battle.

Superboy tries to contain Amazo fighting hand to hand against him, but the android repels him with his vision of heat. Batman, using his combat armor, tries the same thing but only manages to see himself on the ground while the android rips off pieces of the armor and is about to kill him.

But at that moment, something hits Amazo's head and saves Batman's life. A shield. thrown by Wonder Woman, who, holding out her hand to Bruce, tells her they have work to do. Despite Wonder Woman's reinforcements, Amazo is able to outlast the others until something launches him to the moon, where he is destroyed. When Batman begins sparking conflict with Wonder Woman, Superboy intervenes and defuses the situation, placing priority in tending to the wounded.

Hoping to gather new recruits for the Teen Titans, Superboy and the others choose to visit Blue Beetle and try to bring him in, but the teen is kidnapped by Lobo under orders from Metron. Metron reveals a new threat posed by the Red Lanterns of Atrocitus and Superboy and the Titans move to rescue the Green Lanterns stationed at Oa.

As various Green Lanterns were possessed by Starro, Superboy joins Hal Jordan's charge to rescue the remaining lanterns. During the chase he and Wondergirl are separated and end up running into Brainiac's ship. The alien, intrigued by the Kryptonian design of Conner's suit, sends his robots to capture both. As their oxygen masks were destroyed, the pair are forced to enter the ship, where they are tortured and interrogated. Conner and Cassie are later abandoned and left to suffocate in the vacuum of space, but they are rescued by heroes of another timeline, brought in by Booster Gold. The pair depart to join their saviors and are never heard of since.

Retrieved from "https://dc.fandom.com/wiki/Kon-El_(Injustice)?oldid=2733482"
Community content is available under CC-BY-SA unless otherwise noted.