On Tamaran we appreciate the past. We respect it. But we don't live there. We live here. Now. In the moment.

Koriand'r is an alien princess from the planet Tamaran who lived in peace and happiness until her home planet was conquered. Banished from Tamaran, Koriand'r was enslaved and experimented on, granting her extraordinary powers which she used to lead a rebellion and liberate herself and her fellow slaves from their captors. She became known throughout the cosmos as Starfire, and settled on Earth, where she became a member of the superhero teams the Outlaws and the Teen Titans.

Princess Koriand'r was the youngest daughter born to the First House of Tamaran. She lived a happy and peaceful life until her home planet was attacked by the alien conquerers, the Citadel, who operated under the orders of the evil Dominators. The Citadel killed Kori's family, with the exception of her older sister Komand'r, and enslaved the entire population of Tamaran, including Kori. They appointed Komand'r as the leader of Tamaran, seeking to use her as a figurehead to appease the planet's people. However, in an attempt to take away the people of Tamaran's will to fight back, they forced Komand'r to publicly banish her sister from the planet.

Kori was taken by the Citadel and was the subject of numerous painful experiments. She was discarded in Takron, a savage prison populated by aliens from the various planets the Citadel had conquered. The Citadel suspected she would perish quickly, but she survived motivated by her rage. After lashing out against a Citadelian guard, Kori projected huge amounts of energy from her body, and realized the experiments conducted on her had unintentionally given her incredible powers. She was restrained and further experimented on, enslaved and drugged to keep her compliant.

Eventually, Kori was forced to work on a slave ship called the S.S. Starfire, where she met Orn, a rebel Citadelian who had been enslaved by his own people. He showed Kori kindness and love, and smuggled food for her. She began training in secret with Orn, and eventually managed to empower the slaves on her ship to overthrow their captors, leading a rebellion that freed the aliens from their captors. Kori took control of the ship she had been enslaved upon, liberated the people of Tamaran, and became known throughout the galaxy as Starfire.[2]

Red Hood and the Outlaws

Kori lived on Earth for some time and used her powers to fight for justice, before suddenly losing her memories. She found herself in her alien ship on an island in the Caribbean, not knowing how she had got there. She lived solemnly until she discovered an injured Jason Todd, who had washed up on the island's shores. Jason reminded Kori of her former lover Dick Grayson, and she decided to use her ship's Tamaranean technology to nurse him back to health. Jason told her of his history as Robin and his superhero identity as Red Hood, and the two quickly grew fond of one another. 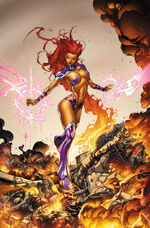 Starfire during her time with the Outlaws

Jason lived with Kori for a short time until he learned that Roy Harper was scheduled to be put to death as punishment for protesting in Qurac.[3] Jason requested Kori's help in rescuing him, and Red Hood and Starfire succeeded in their mission. The three heroes traveled back to the Caribbean, and Kori and Roy began a sexual relationship. They later decided to band their efforts, forming a mercenary team called the "Outlaws".[4]

One of the team's earliest adventures led them to encounter an alien hunter named Crux. Crux had targeted Koriand'r after discovering a photograph of her on the internet, and wanted to drain her powers away and gain them for himself. Starfire was attacked by Crux, who used Tamaranean technology against her in attempt to strip her of her powers.[5] He failed to do so, as Starfire had grown resistant to the technology after the experiments she had undergone by the Citadel, though Crux did severely wound her in the process. Kori was rescued by Arsenal, who managed to fend off Crux while she gathered her strength. Together they overpowered the alien hunter, and Kori was about to kill Crux until she and Roy were forced to retreat after Jason arrived, followed by an angry mob who were intent on chasing him.[6]

The team traveled to Gotham City to rescue civilians who were being held hostage in Gotham General Hospital by Jason's former adversary Suzie Su. Shortly afterwards, their ship intercepted a message sent from Alfred Pennyworth to the Batman Family, which explained that the Court of Owls had sent multiple Talons loose across Gotham where they were targeting forty people of interest. The Outlaws decided to stay and help, and attempted to protect one of the Court's targets: Mister Freeze.[7] Starfire and Arsenal were tasked with keeping Freeze safe, while Red Hood pursued the Talon that had been sent for him. The heroes managed to defend Freeze and delivered him to Batgirl before they left Gotham.[8] 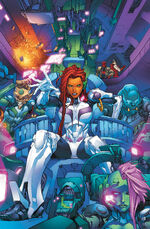 Kori was awoken to a visit from her friend Orn, who had helped her overthrow her captors when she was a slave. Orn informed her that Tamaran had been taken over by the Blight, a parasitic alien race, and requested she return to her former role as the former commander of the H.M.S.S. Starfire to defeat them. Orn teleported Starfire, Red Hood and Arsenal to the ship,[9] however Kori was hesitant to rescue her people once again, feeling that they had never attempted to help her. Roy convinced Kori to fight the Blight, but he was eventually captured by members of the alien race, forcing Starfire to return to her home planet.[10] Kori successfully rescued Roy and was reunited with her sister Komand'r, who had been forced to work with the Blight to stay alive. The two tearfully reconciled and worked together with the Outlaws to take on the Blight.[11] They succeeded in protecting their home planet, and Komand'r offered Koriand'r the chance to join her on the throne and rule Tamaran together. Kori kindly declined her offer, choosing to return to Earth with the Outlaws instead.[12]

Koriand'r later found her home planet of Tamaran from being invaded again, this time by the Helspont. When the Outlaws arrived on the planet they discovered that Komand'r had sided with the Helspont in order to ensure the safety of her people and had ensured that Tamaran was spared. Koriand'r was devastated to learn of her sister's apparent betrayal, however, Komand'r heard her sister's pleas and betrayed Helspont, destroying him and nearly killing herself in the process. This led Kori and Roy to break up - though purely out of necessity - as Koriand'r was forced to return to Tamaran to ensure that Komand'r could get the medical attention she needed. The two shared a kiss, and Koriand'r promised to remember Roy for "forever and a day".

Starfire would eventually return to Earth and started to live in Key West, a small coastal town. She desired to experience a normal human life and appeared to have no interest in heroism. She befriended the local Sheriff, Stella Gomez, who helped her find a place to live and constantly dealt with Kori's naiveté regarding human culture. Kori also got to know Stella's widowed brother, Sol (who happened to bear a striking resemblance to Dick Grayson), and later began dating him. Starfire later met Atlee, a waitress who was secretly a super-powered woman from a civilization living below the Earth's surface. Despite no longer wanting be a hero, trouble continued to find Kori in her new home and she was forced to defend Key West from various threats. After a trip to Atlee's home, Starfire decided that she should once again use her powers to help others. She left her friends in Key West and tried her hand at being a hero once again.

Inspired by her earlier life as a slave, Starfire had begun investigating a human trafficking ring going on in the East Coast. She managed to locate the base of the operation on an island, but while talking to a person who had information she needed, she was knocked unconscious by an unknown person. She awakened in an unknown location surrounded by the other young heroes Beast Boy, Raven and Kid Flash. The identity of their captor was revealed to be Robin, who kidnapped Koriand'r and the others with the intention of creating a new team of Teen Titans.[13] Damian then reveals that Ra's Al Ghul has sent a team of assassins after them. 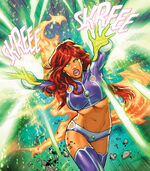 Retrieved from "https://dc.fandom.com/wiki/Koriand%27r_(Prime_Earth)?oldid=2849794"
Community content is available under CC-BY-SA unless otherwise noted.