The Mad Guardian · The Renegade Guardian

formerly Guardians of the Universe

I am a scientist... and I dedicated myself to the observation of multiversal possibilities. Other universes... the beginning of time... the ending.

The story of the beginning of the Multiverse has always been the story of Krona.

The trigger for the Maltusian race to leave the contemplative comfort of their home, and take on the Guardianship of the Universe, were the actions of the Maltusian that would later be known as the "Renegade Guardian'[1], Krona. There were no lines that he would not cross in the pursuit of knowledge; opening a forbidden window on the beginning of time and sacrificing the entire Sector 666 just to prove a point about the Manhunters; obligating the Guardians to spend the next ten billion years bringing order to the universe. Krona's transgressions in Sector 666 further lead to the prophecy of the Blackest Night - a crisis which ironically freed Krona from Nekron's realm to return to the universe.

Happy, humble, and kind[2] is how Krona describes his younger days. He had two wives and a child, and was engaged in scientific study, as many of the Maltusian race were. His contentment ended when tragedy struck and Krona lost his family in a house fire. He mourned them, wearing the cloak of the White Lantern, and became obsessed with the truth, the past... life and death."[2]

With renewed fervor, during Maltus' golden era of discovery, Krona gathered every piece of evidence of Perpetua and the seven energies of creation. She was the creator of both the previous "perpetual" universe and the then-current one; being the mother of the Monitor, Anti-Monitor, and World Forger. In her works, Krona found evidence of the galactic beginnings and endings that he sought. He studied her secrets, understood them, and hid them in the vaults of Thanagar Prime.[3]

Window to the Beginning of Time 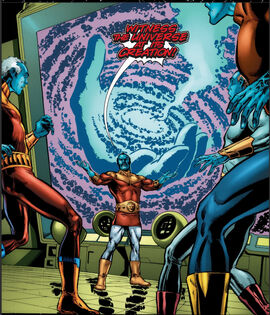 Once returned to Maltus, Krona continued his study of the multiverse and devised a machine to open a window on the first spark of creation - directly contravening the taboos of his people. Triumphant; Krona demonstrated the machine in the presence of fellow Guardian Ganthet. They stared as - in the first moments of existence - a giant hand opened and unfurled the universe; first in amazement; and then in horror; as they discovered that the hand wore a ring. The screen exploded and Volthoom, the First Lantern, appeared before them.[4]

After Krona's transgression, the Maltusians met to discuss his punishment. While Krona was present when the Guardians shed their emotions into the Great Heart, he was ultimately cursed and exiled by the rest of the Guardians for his transgressions. They sent the emotionless Manhunters after him, and to escape capture he created a Gauntlet which harnessed the green light of Willpower, based on the proof-of-concept device that brought Volthoom back in time across dimensions to Maltus - the Travel Lantern.

Krona believed that it was a mistake for the Guardians to create an unemotional police force, and to prove his point, Krona rewrote the programming of the android Manhunters to destroy all life in Sector 666.[5] The destruction of Sector 666 also gave Krona the chance to momentarily escape the Guardians, and explore the unknown.

Breaching the Barrier Between Universes

The universe previous to Earth 0 was somehow accessed by a young Krona, who brought the entire future Green Lantern Corps with him. Krona was there to both bare witness to the end of that universe, and evade the Guardians. The Corps was brought through a tear made in the Source Wall, a tear caused by Black Hand at the conclusion of Green Lantern: Godhead. An alliance with Relic allowed Krona further knowledge of the Emotional Electromagnetic Spectrum, the end of a universe, and the Source Wall itself.

It was not known at the time, how Krona traversed the Source Wall into the previous Multiverse; nor how he returned - just that his chrono-exploration was against the will of his fellow Guardians.[6]. Further it was the actions of Krona that motivated the Multusians to move to Oa and take on the mantle of the Guardians of the Universe.

War Of The Green Lanterns[7]

Nekron's defeat at the end of Blackest Night had allowed Krona to escape the Dead Zone. His first thoughts were of revenge. Krona used his knowledge of the Emotional Spectrum, and possession of Parallax and Ion, to override the will of the Green Lantern Corps and make them his slaves. As he had been the keeper of the Entities in ancient times, he was able to control them[1], as well as wear each of the seven Corps rings simultaneously.

Despite his power, Krona was killed by a focused blast of Green Lantern energy, fired by Hal Jordan. His death concluded the War of the Green Lanterns and his first appearance after Flashpoint was as a corpse at Ysmault.[5]

Volthoom later manipulated reality during the Wrath of the First Lantern to show John Stewart what would have happened if he hadn't killed Mogo [8]. Krona would have been in control of the entire Green Lantern Corps.

The last living member of Sector 666 - Atrocitus - was angered that his vengeance had been denied by Hal Jordan. Atros had watched his family burn at the hands of the Manhunters, so long ago, and; his vengeance thwarted; he tore out Krona's heart for blood magic. As Atrocitus began creating a new purpose for the Red Lantern Corps, he returned again and again to the corpse of Krona to consult his dead confidant; and perfect his manifesto of revenge. No adversary was ever so pliable.

Days later, Atrocitus found Krona's corpse gone. Atrocitus feared that Krona had returned - as he had so many times before - but his flesh had been eaten and his skin worn by Abysmus, who used the remains to perform his own blood magic.[9]

Wrath of the First Lantern 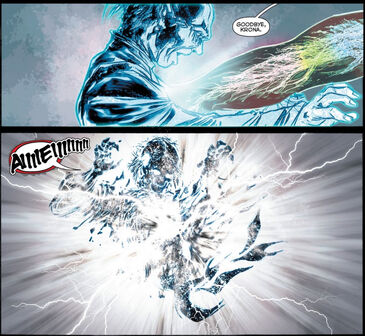 Krona's body was destroyed, but his emotional essence had always resided in the Great Heart. When Atrocitus and his bewitched Manhunters burrowed under the surface of Maltus, they found the Great Heart where the Guardians had long ago placed their emotions.[10] Krona's "electrical echo" confronted Atrocitus and demanded pity. He was "happy, humble and kind"[2]; before his two wives and child died in a house fire.

Atrocitus considered Krona's loss a different thing than his own. Krona had committed genocide, but Atrocitus still had trouble maintaining his hatred of Krona. Before Krona's emotional spirit could have continued, Volthoom the First Lantern destroyed him, seemingly for good.