Lady Blackhawk (Zinda Blake) is an ace aviator and gunhand. Originally a wealthy socialite, she managed to secure a place in the bastion of manliness known as the Blackhawk Squadron, a group of resistance pilots fighting the Nazis. Then Zero Hour happened, and she was displaced in time to the present. After short stints of work for Warriors and the Suicide Squad, she became the spokesperson for Blackhawk Airways. Not content with not being allowed to fly, she joined Oracle and the Birds of Prey.

Three other women have taken up the name Lady Blackhawk: Natalia Reed is a Russian-born engineer introduced by Howard Chaykin, and was written out of continuity with Zero Hour. After Flashpoint, a new Lady Blackhawk is a part of the Blackhawk Program. Kendra Saunders also took the name as the leader of the anti-apocalyptic team, the Blackhawks. 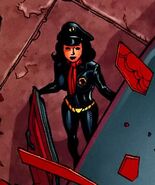 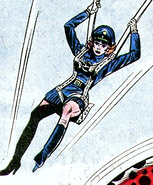 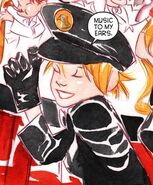