Lana Lang was a childhood friend of Clark Kent and a rival of Lois Lane to his affection.

Lana Lang was born and raised on a farm in the midwestern Kansas town of Smallville. During her teenage years, she met her next-door neighbor, Clark Kent, and developed an instant infatuation with him. Her interest in Clark was matched only by her affection towards the local super-hero, Superboy. Lana spent a large portion of her high school years obsessing over Superboy, and she labored intensively to discover his secret identity. One day Lana rescued an insect-like alien trapped by a fallen tree in Smallville. In gratitude, the alien gave her a Bio-Genetic Ring which allowed Lana to gain insect (and insect-like, such as arachnids) characteristics.

After being given a Bio-Genetic Ring by the aliens, Lana created a yellow honeybee-like costume and mask and adopted the codename Insect Queen[8] who occasionally appeared as the crime-fighter. She had various adventures with Superboy and became a reserve member of the Legion of Super-Heroes.[9] By the time she left Smallville to enter college, she had yet to learn Superboy's greatest secret. She would later become a rival of Lois Lane for the affection of Superman, and co-anchor the WGBS-TV newscasts with Clark Kent. Lana's affection for Superman began to drift away and became romantically linked to the alien super-hero Vartox. Lana and Clark Kent became romantically involved in stories prior to the Crisis on Infinite Earths. 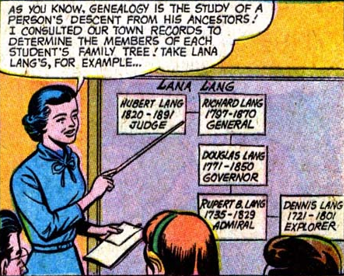