Lana Lang is a childhood friend of Clark Kent. The two shared a mutual attraction for each other throughout their youth.

Lana found out about Clark's abilities when they were children, after he saved her life.[1] Some of Clark's powers activate for the first time around Lana (when they shared their first kiss it activated Clark's heat vision and when Lana was swept up in a tornado Clark flew for the first time and saved her). Lana is one of the few people who are aware that Superman and Clark Kent are one and the same.

Lana later attended Metropolis University and pursued a degree in Business and became a successful businesswoman.

Years later, Lana eventually got involved with another childhood friend, Pete Ross, and Pete soon proposed to her. Lana was initially reluctant to set a date for the wedding (still pining after Clark) but after an incident with Bizarro and Superman reaffirmed that Clark would never love her the way she loved him, she decided she wanted to marry Pete as soon as possible.[2] Lana and Pete were married in a small, private ceremony at the Kent's house, with only a few guests since Clark and Lois were busy in Metropolis.[3] Lana and Pete then settled into a quiet life in Smallville.

Not long after being married, Lana became pregnant, but complications caused the baby to be born premature. She contacted Superman and asked him to take the baby to a more advanced medical facility in Metropolis, carried in a special traveling compartment. Unfortunately, along the way, Superman is attacked by Brainiac, who then was using Doomsday as a host body. After knocking out Superman, Brainiac/Doomsday takes the baby to his lair, intending to use the baby to grow a new body for himself (as Doomsday's body was beginning to reject his mind). Superman managed to defeat the villain and rescue the baby, discovering that as part of the process of preparing him for Brainiac's experiments, the baby had been aged to term. Returning the child to his parents, Lana insisted on naming the baby Clark Peter Ross.[4]

In 2000, Pete Ross became Lex Luthor's vice presidential running mate in Luthor's bid to become President of the United States, and after the two won, Lana moved to Washington, D.C. Before moving in, Lana had a talk with Superman, promising that she would keep his secret and announcing she had no feelings for him anymore -- she even went so far as to say that her baby was really named after Martha (her maiden name being Clark).[5]

Luthor was forced from his office, and Pete Ross became president (and Lana the First Lady of the United States). Eventually, Lana and Pete separated and divorced due to Lana's dissatisfaction with Pete and her consistent yearning for Clark, and Lana began to attempt to regain Clark's affections, much to the anger of his (now) wife Lois Lane. However, Pete and Lana reunited after Superman saved them from being killed by the villainous Ruin [6]

Superman: The Coming of Atlas

Following the fall of Lex Luthor during an attack against Metropolis, the chairmen of LexCorp finally voted him off of the board. In an exclusive article to the Daily Planet, the board members publicly announced that Lana Lang was to take Luthor's place as chairwoman and CEO of Lexcorp. Lana served as the CEO of Lexcorp for a short while. Her successful run as CEO was brought to an end when she attempted to use Lexcorp's resources to assist Superman, breaching a contract that specifically stipulated that any Lexcorp employee who knowingly or unknowingly abetted Superman's actions in any way was to be terminated immediately. A hologram of Lex Luthor appeared in her office and promptly fired her.[7]

Lana returned to her family home in Smallville to be closer to her ex-husband and son.

Shortly after, Perry White pursued Lana to take over the Business section of the Daily Planet, a position that Lana was afraid to accept, following her bad experience with Lexcorp. Around that time, Supergirl was standing in the Kent Farm, feeling upset due to a slander piece written by Cat Grant, and hesitant about her cousin's advice to create her own secret identity. Per Pa and Ma Kent's suggestion, Lana reached Supergirl out, offering her advice and friendship. Feeling she and the Kryptonian girl had much in common, Lana decided to take up Perry's offer and help Kara pose as her niece Linda Lang.

Lana and Linda moved back to Metropolis, buying an apartment in Hammersmith Tower, and Lana started working as the editor of the Business section of The Daily Planet.[8]

Soon after, Lana starting developed some kind of mysterious illness, coughing up blood and having occasional nose-bleeds. Lana tried to keep her sickness a secret, but finally Lois noticed. Flamebird's cosmic senses told her there was something wrong with Lana, and she warned Kara.[9]

Kara finally confronted her, but it was too late to stop the illness.[10] Lana ends up collapsing in the lobby of her apartment building crying blood that is also pouring from her mouth. By the time Linda can get to the hospital, it is too late and Lana has seemingly died. But when Linda goes to see the body, she sees Lana encased in a chrysalis.[11] 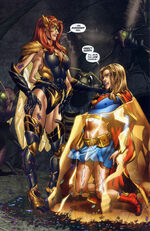 Supergirl is captured when the hospital is engulfed in a massive cocoon and an army of humanoid insects emerge. Once she is freed by Gangbuster, Kara conspires with him and Kimiyo Hoshi to infiltrate the cocoon, rescue the hostages, and find out who is behind the invasion. After being ambushed and knocked out, Kara awakens bound and gagged at the feet of Lana, who has once again reverted back to her Insect Queen form. Insect Queen informs Kara that during her last encounter with Lana,[12] she embedded a piece of her DNA within her in an attempt to repossess her body.

The two women engage in a drawn out battle, with Kara eventually expelling the Queen from Lana's body through the use of an advanced Kryptonian machine. After Lana is cured, Kara informs her that she is leaving her home, feeling betrayed by Lana's unwillingness to share her illness. As Kara flies off Lana realizes that with Kara gone she will be alone.[13]

After the destruction of New Krypton,[14] Supergirl moved back with Lana after spending six weeks missing. Lana was worried about Kara, who was suffering from severe post-traumatic stress disorder. Kara didn't want to talk about her time missing, but she apologized to Lana for leaving her, and wanting to leave her former life behind, she asked if she could become her niece Linda full time.

Lana answered the Langs would be happy to have Linda. Later, while both women are enjoying some coffee and Lana suggests Linda to attend Metropolis University, a quake shakes the city. Realizing Metropolis is being attacked again, and knowing Superman and the Justice League are away, Lana urges Linda to become Supergirl again and help. When Linda refuses, still reeling from her inability to save her own people, Lana gets angry and leaves.[15]

Later Lana discovers it's Bizarro Supergirl who is ripping Metropolis apart. Lana calls Kara and convinces her to go out and stop her Bizarro counterpart.[16]

Unfortunately, their phone conversation is overheard by Cat Grant. Cat Grant didn't found out about Supergirl's secret identity but she heard enough to realize that Lana was in touch with Supergirl. Cat was going to write another slander article on "Supergirl's Daily Planet informant", but she changed her mind when she discovered she was being harassed by someone related to the Toyman. Cat confronted Lana, told she knew about her relationship with Supergirl and needed her help.[17]

Later Lana was invited to the Kent Family's Christmas gathering at the Kent Farm.[18]

Lana and Lois In Credit Check

While Lana and Lois are on their way to work one morning, Lois is telling Lana a funny story about an ugly dog, when Lois spots a lost credit card for a Mr. Kastan Broadway. Lana, spotting a challenge, persuades Lois to track the man down instead of just handing in the card. Chatting to Clark, Lois vents her frustrations. Clark teases his wife, but that only goads her further. As it turns out, Lana's bit of fun has turned into an actual mystery. Kastan exists on paper, but anything prior to six months doesn't exist. His place of employment never existed, his home doesn't either. Lois heads to accounting where Grable, her go to guy for detecting forgeries, works.

Lana and Lois have their interest piqued when Grable reveals the card is linked to Intergang. Elliot Edwards is the unspoken forger for Intergang and, of course, Lois and Lana can't resist infiltrating his warehouse. Lois is able to sneak into Edward's office and question him but as soon as Lois mentions the name Kastan Broadway he clams up and throws the two women out.

Before they were ejected, Lois had spotted a few clues, a post-it note with the initials K.B and a matchbook from The DeCarlo Theatre. As the duo approach, they see a poster of Jack Marsh, aka, Karstan Broadway! Jack reveals he has a third identity, Nathan Edwards, son to one of the founding fathers of Intergang. To escape 'servitude' to this mafia, Nathan's uncle helped him disappear. Lois agrees not to print the story and even recommends Jack's show for a review. As they wait for curtains up later that evening, Lois spots a wallet on the floor, turning to Lana she smiles. "Your turn!"

Retrieved from "https://dc.fandom.com/wiki/Lana_Lang_(New_Earth)?oldid=2860729"
Community content is available under CC-BY-SA unless otherwise noted.