I'd hate to break every bone in your body without you knowing who did it.

Lar Gand, known variously as Mon-El and Valor, is a superhero from the planet Daxam.

Exploring the galaxy, he landed on Krypton, but was immediately warned by Jor-El of the planet's imminent destruction and was given a map to Earth. He then went into suspended animation. After a few years, he landed on Earth and met Superboy. Although Gand suffered from amnesia upon landing on Earth, he and Superboy became good friends. Under Earth's yellow sun, he had powers like those of Superman; this led Superboy to believe that Gand might be his heretofore unknown long-lost brother. Superboy named the amnesiac alien "Mon-El": "Mon" because he landed on Earth on a Monday, and "El" for Superboy's own Kryptonian family name. Monel is also a metallic alloy, an appropriate name for the brother of the man (or boy) of steel.[1]

Trapped in the Zone

Mon-El moved into the Kent home and created his own human secret identity (Bob Cobb) to integrate into Superboy's hometown of Smallville; when in alien garb, he accompanied Superboy on his heroic feats. However, when Mon-El failed to experience pain during an unnoticed inadvertent exposure to kryptonite (which is radioactively poisonous to all Kryptonians), Superboy suspected Mon-El was deliberately pretending to be a Kryptonian for some nefarious purpose. Understandably infuriated over what he believed to be a deliberate manipulation of his desire for ties to his original Kryptonian family, Superboy created a fake kryptonite meteorite made of lead and, when Mon-El was debilitated in his presence, Superboy believed his reaction to be proof of deception. However, Mon-El turned out to be in genuine pain because, in a remarkable piece of irony, Daxamites are highly sensitive to lead, even more so than Kryptonians are to kryptonite; whereas Kryptonians can recover from kryptonite poisoning if removed from exposure in time, even a small amount of lead exposure causes fatal, irreversible poisoning to Daxamites. Having regained his memories of meeting Jor-El and of his true nature, "Mon-El" was dying, so a guilt-ridden Superboy transported him into the extradimensional Phantom Zone until a cure could be found. Gand spent one thousand years as a poisoned, insubstantial, telepathic phantom, able to watch everything that happened in the outside world, but unable to affect it in the slightest.[1]

In the 30th century, Saturn Girl created a temporary antidote to this poisoning allowing him to be released from the Zone for brief periods of time.[2] During this period, he was considered an honorary Legionnaire. Brainiac 5 soon created a permanent antidote, based on Saturn Girl's serum, with the addition of Kryptonite.[3]

After passing his Legion test (including inventing flight ring metal) under the name "Marvel Lad", Lar Gand then joined the Legion of Super-Heroes, using the "Mon-El" moniker Superboy had given him.[3] During this time, he was considered one of the Legion's big 3 (along with Superboy and Ultra Boy). In fact, his Daxamite abilities coupled with his immunity to the effects of Kryptonite and lead (and later, red solar radiation) made him the most powerful of all the Legionnaires. He served two terms as leader. Many years later, he married fellow Legionnaire Shadow Lass, with whom he had a long romantic relationship.[4]

Early in his Legion career, Mon-El apparently died after failing to take a dose of Brainiac 5's anti-lead serum in a timely fashion. Eltro Gand, a distant descendant of Mon-El's older brother, sacrificed his life force to restore Mon-El to life.[5]

Following the Crisis on Infinite Earths, Gand's history was unchanged, except that his encounter with Superboy took place in a Pocket Universe created by the Time Trapper, a mysterious being living at the end of the universe, as Superboy had been removed from Superman's continuity (The Trapper stated that Mon-El is his creation [6] and implies Gand was of the Pocket Universe though it had been earlier stated the Pocket Universe had been "pruned" down to two inhabited planets, Krypton & Earth meaning that Daxam had been wiped out by the Trapper.[7])

During the Magic Wars which destroyed much of the technology throughout the United Planets, Mon-El seemingly died of injuries inflicted by the Time Trapper.[8] Five years later, the Trapper revives him, hoping to use the Daxamite's body to preserve his own waning existence. However, Brainiac 5 discovered that Eltro Gand had not died years earlier, but had merely imbued his personality over that of Lar Gand. The Trapper's actions had separated the Lar and Eltro personalities, leaving both present within Mon-El's mind, with Lar as the dominant personality. In order to prevent the Trapper from further manipulating events throughout history, Lar kills him.[9] The Trapper's death wipes Superboy's pocket universe out of existence, and fundamentally alters the timeline. Although it is largely restored, the Trapper's role and powers are usurped by his onetime underling Glorith, and Lar Gand is recast as "Valor". 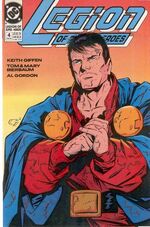 In the new "Glorithverse" reality, Lar Gand replaced the non-existent Superboy as the Legion's inspiration. Lar Gand would enjoy a heroic career in the 20th century as "Valor," stopping the second Dominator-led invasion of Earth, freeing thousands of humans who had been experimented on by the Dominators and seeding them on a series of worlds between Dominion space and Earth as a "buffer zone" to prevent future invasions. These colonists had gained metahuman powers due to the experiments and would (in 1,000 years time), evolve into many of the worlds that would join the United Planets.[10] After completing this task and an indefinite number of other 20th-century ventures, he would be placed in the Bgztl Buffer Zone by the time sorceress Glorith, to be rescued by the Legion in the 30th century.[11] But none of these great 20th century adventures had occurred yet in the modern DCU.

In his new history, Lar Gand was inspired by his father's sacrifice in the Invasion! to become a hero. He briefly joined L.E.G.I.O.N., where it was Vril Dox who cured his lead poisoning.

Gand left L.E.G.I.O.N after a disagreement and traveled to Earth. He played a significant part in the "Eclipso: The Darkness Within" event, in which Superman gave him the name "Valor". His adventures began with Lar as an adventurous young man exploring the universe in a spaceship with a sentient A.I. called Babbage, encountering various aliens and civilizations.

Valor also encountered Starman (Will Payton) in space, while attempting to thwart Mr. Nebula. They join forces to defeat him.[12]

Glorith had continued altering the timeline, inadvertently recreating the original Time Trapper in the process. Travelling back to when Lar Gand was a young man in another attempt to win his affection, she accidentally caused his death. Attempting to undo the damage this caused history, she called forth a duplicate Valor from the Legion's time (a second version of Valor created by the Time Trapper) to take his other self's place, "patched" into the 20th century timeline by Waverider. He was tasked with completing Valor's legendary feats such as stopping the Dominators' second invasion of Earth and seeding the U.P. worlds so that 30th century history would play out as it was supposed to. But history was playing out much earlier than it was supposed to which led to some changes in Valor's exploits. This was one of the many destabilization of the timestream that eventually led to Zero Hour.

Following Infinite Crisis The Legion Of Super-Heroes was once again rebooted this time back to its Pre-Zero hour lineup. After Infinite Crisis Mon-El was heavily retconned due the now Xenophobic nature of Daxam and its Residents. Bal Gand a female Daxamite visited earth during the height of the Inca culture, there she had a child with a Human Man but soon left to avoid her child from being seen as an apparent demi-god. Bal Gand later programmed her ship so that if Daxam and its xenophobia ever came to be an issue for the child it could leave Daxam for earth. Generations later Lar Gand found his suppressed instinct to escape eventually got the better of him and left Daxam and its isolated society behind in his ancestors ship. 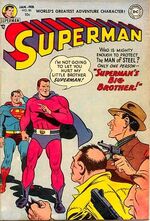 Retrieved from "https://dc.fandom.com/wiki/Lar_Gand_(Pre-Zero_Hour)?oldid=2821238"
Community content is available under CC-BY-SA unless otherwise noted.