Hmph! Doesn't look like much of a god to me! Well, as my mother always said: "Life is full of disappointments, Larfleeze - and you're the biggest

Larfleeze is Agent Orange, the sole wielder of the Orange Lantern Ring, the orange light of avarice. He has come into conflict with many forces due to his greedy nature, primarily the Green Lantern Corps.

Larfleeze was born into a poor family of farmers on the planet Sh'pilkuzz, his parents didn't want him due to his ugly appearance but were forced to keep him as they were only allowed to sell six children legally, which they had already done. Larfleeze was often attacked on by his sixteen remaining siblings, who detested him due to the treatment he received because of his young age. When Larfleeze was fully grown a race of galactic conquerors called the Lakadians invaded his world, forcing him and many of his race into slavery.[1]

While in slavery Larfleeze was forced to mate with a woman named Bronkia, the pair had many children who were sold into slavery. Eventually Bronkia died in slavery prompting Larfleeze to find a way to escape captivity. One night he snuck into the dead wagon (where all the corpses were kept) and was thrown into the crematorium pot, however due to his physiology Larfleeze was able to survive the fires. He then started a prison riot and stole a transport to escape the asteroid.[1]

Larfleeze became a master thief, however when he stole an object of importance he was hunted by the Manhunters, a group of robotic policemen who had gone rogue from their creators- the Guardians of the Universe. Larfleeze and his fellow thieves were able to escape the Manhunters and among their loot they found a map. The map belonged to a Guardian of the Universe named Krona, and led to a temple on a planet called Okaara.[1]

Larfleeze and his fellow thieves travelled to the temple where they found an orange lantern, which told Larfleeze it was the essence of avarice itself. This lantern filled Larfleeze's mind with uncontrollable greed and jealousy telling him that the light could be his, prompting Larfleeze to slaughter the rest of his group so that the lantern could be his. The lantern then gifted him with a ring which would allow him to bend the orange light to his will, and could be charged by the lantern that was in fact a battery for the ring provided Larfleeze uttered the Orange Lantern oath. Larfleeze decided that he should own everything in existence, however he was restricted to the Vega System where Okaara lay by the Guadians of the Universe who were capable of defeating him if necessary.[1]

Over a span of two billion years the manhunters were eradicated and the Guardians took up a new fighting force called the Green Lantern Corps, this corps used rings in the same manor as Larfleeze but instead of using avarice as their power, they used willpower. Larfleeze began traversing his system killing people he found, he would store the essence of these people in his ring and release them as hard light constructs to fight for him, in this way he gathered an army of loyal warriors he called his Orange Lantern Corps and took up the name Agent Orange.[2]

On his travels Larfleeze learnt about the Book of Oa, a text in the possession of the Guardians, this made Larfleeze jealous as he wanted his own book about him. He kidnapped a alien man named Pulsar Stargrave to become his butler and write the text for him. While Stargrave was writing the book Larfleeze learnt of reports that an Orange Lantern had been seen out side the Vega System, this infuriated him as he believed he had the sole right to the orange light of Avarice. 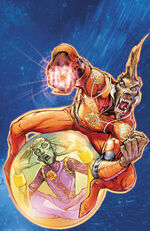 Larfleeze and Stargrave investigating the robbery

After learning that what he had heard was a false alarm he travelled back to Okaara and found out he had been robbed.[3] Larfleeze questioned Stargrave about what happened but was informed that his new servant had been knocked unconscious for the duration of the robbery. Larfleeze decided to hire a group of smugglers known as the Star Rovers to help him find the criminals who robbed him.[2]

Larfleeze and the Rovers met up with a man who named Branx Rancor who was an expert at finding people by using his sense of smell. However a fight broke out between Branx and Larfleeze after Branx insisted that he would have to pay, however Branx began to win the fight because of the ring's low charge. The authorities then arrived and attempted to arrest Larfleeze but before they could his corps came out of the ring without being requested.[4] The constructs attacked everyone in sight including Larfleeze, Larfleeze was able to draw them back into the ring but not before they destroyed the law enforcement. After the conflict Rancor agreed to help Agent Orange, after a small nasal investigation Rancor deduced Larfleeze had all of his possessions on him. As everyone began speculating on what this meant Sayd appeared out of Larfleeze's ring as a construct claiming that she wanted revenge for her death.[5]

Sayd attacked Larfleeze but was contained in the ring once more. Larfleeze speculated that Sayd had tampered with his ring before her death at the hands of the Third Army. Sayd communed with Larfleeze in the ring telling him that before her death she programmed his mind so that at the point of her death Larfleeze would take all his treasure and destroy it, including the Avarice Battery. Sayd told him that she also programmed a construct in his mind of herself, so that if she wasn't killed by Larfleeze Sayd would still have her revenge. With this knowledge Sayd left a distraught Larfleeze with his final possession Stargrave alone.[6]

On his travels Larfleeze was able to retrieve an robot called Brainiac 2.0. This robot had been a servant of Brainiac, who was a galactic collector similar to Larfleeze. 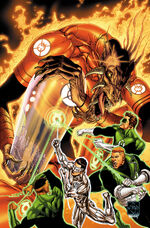 Larfleeze converted Brainiac 2.0 into his servant and used his shrinking technology to solve his storage space issue. With the help of Brainiac 2.0 Larfleeze was able to capture the galactic conqueror Starro and use him as bait to capture the Green and Yellow Lantern Corps. When Starro was released on a world and began terrorizing it the two corps arrived, Brainiac 2.0 was able to shrink them down and capture them, adding them to the grand collection.[7]

The two corps started fighting inside their jar, this made Larfleeze worried as he believed that they would kill each other, meaning that they couldn't be his. Larfleeze decided to set them free because the thought of losing his possessions terrified him, unfortunately the two Lantern Corps were only pretending to fight so that Larfleeze would open the jar.[7] Larfleeze released his own Corps on the enemy, overwhealming the two corps with his superior numbers. However the Green Lanterns soon began to release Larfleeze's collection, the Yellows were then able to overwhealm him due to his fear of loss, making him flee the planet. He then destroyed Brainiac 2.0 and absorbed him into his ring so that he would serve him forever.[8]

Retrieved from "https://dc.fandom.com/wiki/Larfleeze_(Prime_Earth)?oldid=2842625"
Community content is available under CC-BY-SA unless otherwise noted.