Start a Wiki
The first Lazarus Pit was accidentally discovered by Ra's al Ghul while digging a pit. There he discovered the restorative chemical pools while searching for a cure for a dying prince. Although the Lazarus Pit saved the prince's life, it also drove him mad and caused him

The Lazarus Pit is a natural phenomenon that possesses restorative properties that can instantly heal injuries and even grant immortality.

There are various Lazarus Pits located in the snowy mountains of Switzerland, where Ra's has several secret headquarters. The waters of these Lazarus Pits are green, as it is the usual color.

By the time Ra's met Batman, his life force was almost depleted and he eventually died. Ra's and his men had traveled to Switzerland in order to use one of Ra's Lazarus Pits in his secret hideout on the snowy mountains. 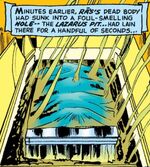 Resurrection Process
Batman tried to capture Ra's and bring him to justice, but Talia convinced Batman that Ra's was dead and after Batman was gone, she activated the machine that was constructed over the Lazarus Pit with a mechanism that placed Ra's in the pool for a few minutes before bringing him back to the surface.[1] This secret base of operations was destroyed after Batman's encounter with Ra's and the Lazarus Pit was destroyed as well. However, the chemicals from the pit mixed with the explosion that destroyed the place and affected Ra's loyal servant, Ubu, who became a crazed zombie after his exposure to the chemicals.[2]

Ra's had another pit located in the Alps, which he often used as it was the safest place for him to start the process of restoration.[3]

The second known Lazarus Pit used by Ra's al Ghul was located on Infinity Island. This Pit is different from others as it is connected to the volcanic system of the island, which makes the chemicals more powerful than the regular Lazarus Pit, but it also makes it more deadly. It is also notable that the waters of this pit are orange-red, due to its connection with the volcanoes. 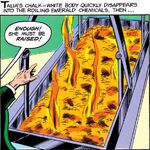 On his quest for world domination, Ra's came across this Lazarus Pit around the 17th Century and as he enslaved the island people and used the Island's resources for his mad crusade, Ra's started using the pit located near the core of the two volcanoes in the island to restore his life. Using the properties of the pit, Ra's also prolongued Talia's lifespan, although he never allowed her to go inside the pit. Ra's was eventually forced to use the pit in order to heal Talia from a certain death, but her sudden defection after such sacrifice caused Ra's to lose his temper and attack Batman, who was partially responsible for Talia's betrayal. During the fight between Ra's and Batman, the former fell to the pit, which caused his body to become engulfed in flames and his mind was brought to the edge of madness. When Ra's fell a second time into the pit, the unusual activity caused the volcanoes to activate and erupt, destroying the entire island and apparently killing Ra's. Needless to say, this Lazarus Pit was also destroyed.[4]

Ra's al Ghul also had a secret pit a few miles away from Gotham City, hidden underneath the earth. This location was eventually found by Batman and during his final confrontation with Ra's, the Demon's Head fell into the pit as the whole place collapsed. The pit was destroyed and Ra's was presumed dead.[5]

The Lazarus Pits have been later used by multiple people across the globe, including Ra's al Ghul's daughter, Nyssa, Black Canary[6], the Riddler,[7] Lady Shiva, Cassandra Cain and Kate Kane.

The fanatical terrorist known as Kobra also had his own hidden network of Lazarus Pits after having analyzed and duplicated the chemical compositions of the Pits. Furthermore, Kobra's analysis of the Lazarus Pits' chemicals allowed him to control those he resurrected as mindless slaves.

Eventually all of the Lazarus Pits were apparently destroyed by Bane and Batman, except for one. Because each Lazarus Pit can reportedly only be used one time,[citation needed] Ra's had to accept the fact that eventually he would die (a notion that is subject to debate, as there is evidence of him existing in the 31st century). His daughter Nyssa, however, had discovered a way to make the Lazarus Pits last indefinitely, but rather than let her father use it, she stabbed him to death. Although supposedly only one pit remains, its location has appeared vague — at one point it appears to be in an island compound Ra's assaulted. Later it appeared to be in a completely different location, and another "last" pit was constructed inside the Batcave. This may in fact indicate that there is more than one pit remaining, or that Nyssa was able to create additional pits.

The substance that fills each pit is a chemical blend of unknown composition, seemingly originating from somewhere within the Earth's crust. For an unknown reason, it bubbles to the surface only at certain key points around the globe, typically at the junction of ley lines. The chemicals can rejuvenate the sick and the dying (and even the technically deceased as long as they have not yet truly died), but will typically kill a healthy user. In addition, it appears to act as a youth restorative sometimes, decreasing the age of a user depending how long they were in the pit, and in many cases, resurrect the dead.

For maximum efficiency, however, someone must be placed in the Lazarus Pit within a relatively short period of time following their death. Although older bodies may be resurrected, there is no guarantee that they will return in perfect condition. On one occasion, Ra's exhumed the bodies of Thomas and Martha Wayne, threatening to immerse them in the pit, thus transforming them into undead zombies.[9]

When used to heal or to bring someone back to life, that person is also rendered temporarily insane — although in one instance when it was used for the Joker, the reverse effect occurred (i.e., it temporarily rendered him sane).[10]

Retrieved from "https://dc.fandom.com/wiki/Lazarus_Pit?oldid=2581356"
Community content is available under CC-BY-SA unless otherwise noted.