"Time and Chance": On Winath, Garth Ranzz wakes up in a sweat from a dream flashing back to the day his brother crash-landed on Korbal with him and his sister and met the [[Lightning Beasts o

Part of the "Zero Hour" event.

On Winath, Garth Ranzz wakes up in a sweat from a dream flashing back to the day his brother crash-landed on Korbal with him and his sister and met the Lightning Beasts. Worried that his parents will discover he has run away from home, he packs his bags preparing to leave his hotel room.

Taking off on a shuttle for Earth, Rokk and Garth find themselves sitting next to each other. They are delighted to find themselves sharing a shuttle with the richest man in the cosmos, billionaire inventor, industrialist and philanthropist R. J. Brande. Garth also has an embarrassing moment when Imra becomes aware of his thoughts wandering towards her.

While everyone is getting off the Shuttle on Earth, the three teenagers are thrust into action when a group of assassins shows up attempting to kill Brande. Working as a team, with Rokk's magnetism, Garth's Lightning abilities and Imra's telepathy, they are able to subdue them and save Brande's life.

Elsewhere, the man behind the assassination attempt, Brande's business partner Roderick Doyle, continues his plotting. Worried about displeasing his masters, who wish the new United Planets idea to fail, Doyle prepares for his last given attempt to murder R. J. Brande.

Appearing in "Time and Chance" 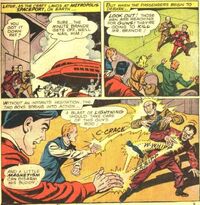