[You're] a kid who wasn't out to hurt anyone. Sure, you've done your fair share of armed robbery, grand theft, destruction of property, kidnapping... But you never wanted to start a new ice age or turn people into popsicles.

Leonard Snart, also known as the thief Captain Cold, is the on-again off-again leader of the Rogues, making him an enemy of the Flash.

Leonard Snart experienced a rough childhood. His mother died when he was a child, forcing him and his younger sister Lisa to be raised alone by their father, who had not taken his wife's death well and resorted to alcoholism and physical abuse. Leonard's only refuge, was when his nurturing grandfather would sometimes invite Leonard and his sister to visit him at the ice factory where he worked; Leonard grew up to cherish the cold atmosphere as a symbol of his escape from abuse.

Into adulthood, Leonard, a bright mind, decided to pursue a life of crime and thievery. Though Lisa was an ice skating prodigy, Leonard's protective attitude and Lisa's appreciative acceptance lead her to give up her dream and instead follow her brother down a darker path.[1]

Stealing a Cold Gun to use for his schemes in Central City, Snart developed the alias "Captain Cold" when he was forced to fight the city's newest hero - the Flash. As a survival technique, Snart and his sister "Golden Glider" teamed up with some other members of the Flash's rogues gallery, thus forming the adequately named team - the Rogues.

While leading the Rogues, Leonard grew increasingly frustrated that their high-tech weaponry was not enough to prevent the Flash from thwarting their every attempt at crime. After a failed robbery, Leonard angrily pinned the blame on the Trickster and fired him from the team; his frustration and guilt over the issue drove him to drinking. After a sloppy attempt at a robbery from which the other Rogues had to save him, Leonard received an invitation from Dr. Darwin Elias that would make him powerful enough to stop the Flash in his tracks.

The Rogues placed their themed weapons into Elias' genome recoding device, and fused their DNA with the weapons. While Leonard was imbued with the power of Cryokinesis, his sister was not so lucky. She was separated from her body into an astral form. Her real body was left comatose, and afflicted with a malignant brain tumor. Naturally, Leonard blamed himself - as did Lisa's boyfriend Sam, who was trapped within the Mirror World as a result of the experiment. They decided, then, to disband the team.[2]

After the Flash caused an EMP blast that rendered the Gem Cities without power, Leonard learned that the hospital caring for Lisa would not have enough reserve energy to power the laser that could save her from her cancer. Seeking revenge against the Flash, Leonard decided to eschew the Rogues' rules and kill him. Hoping to get the Flash's attention, Captain Cold froze the river between the Gem Cities.[3] Leonard learned that his powers backfired if he got wet and inadvertently encased himself in ice, from which the Flash extracted him. When he learned of the reason for Captain Cold's attack, the Flash promised to do all he could to help. The hero created a battery powered by Speed Force energy to power the laser, saving Lisa's life.[4]

Despite her brother's efforts, Lisa was not as grateful as Leonard had expected and went behind his back to reunite the Rogues as their new leader. They boxed him out of a traid,heist, and, in anger, Captain Cold turned to the Flash for help in fighting the new Rogues.[5] However, once Leonard came face to face with his sister again, he turned on the Flash and rejoined the Rogues, just in time to witness the beginning of a gorilla invasion.[2]

Realizing that an invasion of war-like, talking gorillas was not their forté, Captain Cold woke the Flash from unconsciousness and admitted that despite having only just double-crossed him, the Rogues would have to ally with the Flash to keep their city safe.[6] While the Flash sought out the leader of the gorillas, the Rogues turned to saving civilians from gorilla pillagers.[7] Despite bickering between Leonard and Lisa as to who the real leader of the Rogues was, they formed a plan to send the attacking gorillas and their buses into the Mirror World.[8] Unbeknownst to them, that plan resulted in the creation of the Reverse-Flash.[9] Once the Flash had defeated Grodd, the Rogues returned the civilians to their homes.[10]

After yet another heist was thwarted, the Rogues, in frustration, revealed to Cold that none of them had ever forgiven him for forcing their powers on them, and he decided that he would once again disband the Rogues. Again, drunkenly attempting to commit the same robbery that they had failed to complete earlier, the Rogues returned to prevent Leonard from getting caught, and Cold finally admitted his guilt and apologized to them. With the team united again, Leonard decided they should break the Trickster out of prison, believing in the theory that "once a Rogue, always a Rogue". However, when they arrived at Iron Heights, the prison was opened up by a mysterious speedster who proclaimed that the Justice League was dead and that villains now ruled the Earth.[11]

With their city practically destroyed by the return of the gorillas, Leonard's main concern was for the safety of his sister. After freeing the police force, the Rogues decided they didn't want to be involved in the new world of villainy and actively opposed the Syndicate and the Secret Society.[12] 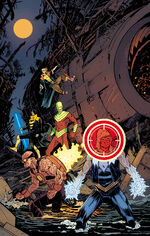 Enemies of the Crime Syndicate

Gaining the attention of the Syndicate member Deathstorm for his insubordination, Captain Cold was caught by the monster and had his DNA re-encoded, stripping away his powers. Dragged into the Mirror World by Mirror Master just in time to save him, Cold landed in Metropolis, separated from the rest of the Rogues. Quickly rebuilding his original Cold Gun from memory, Cold joined forces with Lex Luthor, who shared the same goal of undermining the Crime Syndicate's invasion.[13]

Having grown bored of his time at LexCorp, Snart returned to leading the Rogues in Central City. When a warrant went out for the Flash's arrest due to a plan orchestrated by the Riddler, Cold and the Rogues jumped at the opportunity to beat their archnemesis at his own game and arrested him.[14] However, as Nygma's plan developed and threatened all of Central City, the Rogues turned coat and fought side-by-side with the Flash yet again to save the city from the Riddler's threat of terror.[14]

After their victory, Cold and the Rogues went into hiding for weeks as Snart planned what he thought would be one last heist. With upgraded costumes, the Rogues seemingly perfectly planned every move the Flash would make and, by splitting up and using their skills to rob multiple locations, seemingly got away. However, due to Heat Wave's arrogance in fighting the Flash and diverting from Cold's perfect plan, the hero intercepted their getaway boat. Even with an upgraded Black Hole Cold Gun, Captain Cold and the Rogues were still defeated by the Flash and sent to Iron Heights.[15]

Not long after being sent to prison, the Rogues secretly set up criminal operations within Iron Heights and became kingpins within the system. For weeks, they ran an empire under the noses of both the Flash and the warden Gregory Wolfe until their own Rogue members - Turbine - expressed a desire for reformation and threatened to rat them out. Not wanting to put the empire at risk, Cold snapped Turbine's neck and framed Trickster. However, thanks to the Flash's detective skills, the hero uncovered the operation and exposed Cold as the killer, getting him transferred to Belle Reve.[16]

Retrieved from "https://dc.fandom.com/wiki/Leonard_Snart_(Prime_Earth)?oldid=2818640"
Community content is available under CC-BY-SA unless otherwise noted.