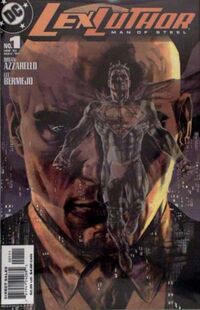 Lex Luthor: Man of Steel is a five-issue miniseries published in 2005, written by Brian Azzarello and drawn by Lee Bermejo. It focuses on Lex Luthor as an extremely human protagonist and tries to show him in a much better light than his traditional villain role.

Retrieved from "https://dc.fandom.com/wiki/Lex_Luthor:_Man_of_Steel_Vol_1?oldid=2842782"
Community content is available under CC-BY-SA unless otherwise noted.