Batman: "Night of the Reaper!"

Batman: "Night of the Reaper!"

Flash: "The Doorway to the Unknown!"

Superman: "The Last Days of Superman!"

Appearing in Batman: "Night of the Reaper!"

Synopsis for Batman: "Night of the Reaper!"

This story is reprinted from Batman #237. 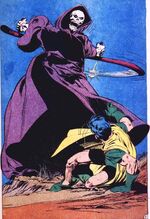 
Appearing in "The Demon Within!"

Synopsis for "The Demon Within!"

This story is reprinted from House of Mystery #201.

When a family concerned with their social standing within the community discover that their little boy has the ability to shape-change into a demon, they have the child lobotomized so that his behavior does not continue to embarrass them.


Appearing in Flash: "The Doorway to the Unknown!"

Synopsis for Flash: "The Doorway to the Unknown!"

This story is reprinted from The Flash #148.

The Flash gets a visit from a repentant crook named Fred Dallman, who puts him on the trail to save the life of a man he framed for his crime, and who, in turn, gets him to save his brother from a life of crime. But when the speedster mentions Dallman's name to the police, he learns that Dallman died last night at midnight--precisely the time he appeared to the Flash.

This story is reprinted from Our Army at War #241.

This story is reprinted from Tomahawk #136.


Appearing in Superman: "The Last Days of Superman!"

Synopsis for Superman: "The Last Days of Superman!"

This story is reprinted from Superman #156.

When an unmanned space satellite is threatened to impact with a mysterious object in space, Jimmy Olsen calls Superman to help out. The Man of Steel pushes the satellite out of the way, and realizes that the object is made of Green Kryptonite, he uses the satellite's discarded booster rockets to knock the object to a deserted part of Metropolis. With Jimmy Olsen, Superman reads the glowing object and learns that it was from Krypton, and contained a sample of Virus X, a deadly plague that could kill Kryptonians. At a safe distance, Superman smashes the glowing object with a rock while Jimmy Olsen snaps a picture.

When Superman suddenly feels weak, he realizes that he may have been infected with Virus X. Jimmy takes Superman to the hospital to be diagnosed. A doctor tells Jimmy, Lois, Perry and Lana Lang that Superman does appear to be weakening and is at risk of death. Superman slips out to his Fortress of Solitude and ponders at all the things he still needs to accomplish and also worries that he might also infect Supergirl with Virus X.

Returning to Metropolis to visit the Daily Planet, Superman announces that in the next 30 days he's going to attempt to accomplish the most important tasks that he wanted to carry out for the Earth before he dies of Virus X. Although weakened, Superman attempts to use a giant shovel to dig canals around the Earth as a complex irrigation system but is too weak to do the job.

Still wishing to carry on his final tasks, Superman calls in his Superman Robots to build a quarantine room for him so that he can command his friends on how to carry out his final wishes. While Jimmy Olsen's friend stays by the Man of Steel's side, Superman summons Supergirl, Krypto and the Legion of Super-Heroes to carry on his final tasks. With their aid he manages to build the irrigation system that he had originally intended. Becoming too weak to do any more, Superman returns to his quarantine room.

Supergirl leads the Legion of Super-Heroes on a number of tasks outline by Superman: They destroy a a distant planet on a collision course with Earth, collect enough metal to destroy a space fungus that threatens to destroy all life it comes into contact with, and create an artificial sun in Antarctica so that the continent can be terraformed to support human life. As this is going on, Brainiac 5 works tirelessly trying to find a cure for Virus X, but fails to do so.

With Superman's time running out, the Legion and Supergirl save Atlantis from the threat of a radioactively mutated sea creature. Superman reflects on his life and goes about saying goodbye to his friends Batman and Robin before writing a farewell message on the surface of the Moon that also reveals his secret identity. Satisfied with his accomplishments, Superman waits for his impending death, however Supergirl is not ready to give up. Traveling through time, she arrives on Krypton of the past where she learns that a cure was made, however it would prove to be lethal to all other life in the universe. With no other choice, Supergirl returns to the present to await her cousin's death.

As Superman's condition worsens, Saturn Girl is telepathically contacted by Mon-El from the Phantom Zone. Mon-El explains that Superman is not suffering from symptoms of Virus X, but from Kryptonite poisoning and reveals that a fragment of Kryptonite was embedded in Jimmy Olsen's camera when he snapped a picture of Superman destroying the Kryptonite laced contained containing the virus. With the chunk of Kryptonite found and removed, Superman miraculously returns to full health, and before anyone can see the message revealing his identity, he, Supergirl and Krypto combine their x-ray vision to erase the message. With Superman alive and well, the Legion of Super-Heroes are thanked for all their help and they return to their own time.

Retrieved from "https://dc.fandom.com/wiki/Limited_Collectors%27_Edition_Vol_1_C-52?oldid=2368475"
Community content is available under CC-BY-SA unless otherwise noted.