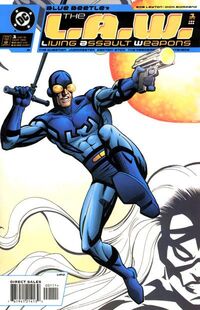 Living Assault Weapons is a six-issue miniseries published between 1999 and 2000, highlighting ex-Charlton Comics characters in the DC Universe. During the series, they comprise a team called L.A.W., an acronym of the series' title, when the Justice League of America mysteriously disappears.

Retrieved from "https://dc.fandom.com/wiki/Living_Assault_Weapons_Vol_1?oldid=2647748"
Community content is available under CC-BY-SA unless otherwise noted.