Lobo: A Contract on Gawd (Volume 1) 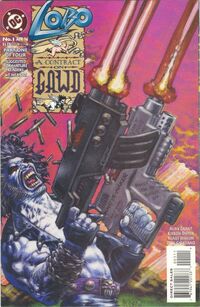 Lobo: A Contract on Gawd was a 1994 four-issue miniseries written by Alan Grant and illustrated by Kieron Dwyer. It features Lobo, the notorious interstellar hitman being hired by a group of monks to murder their planet's resident deity, a being known as "Gawd."

Back to Comics Contents : Comics L : Lobo: A Contract on Gawd Vol 1

Retrieved from "https://dc.fandom.com/wiki/Lobo:_A_Contract_on_Gawd_Vol_1?oldid=1479251"
Community content is available under CC-BY-SA unless otherwise noted.