Lor-Zod is the biological son of General Zod and his lover Ursa who was conceived and born in the Phantom Zone. He and his mother were freed from the Phantom Zone when Lor was around the age of 10 by his father using the Phantom Zone Projector when Zod and Eradicator, assisted by their former allies the Superman Revenge Squad, attacked Superman in the Fortress of Solitude.[1]

Lor-Zod and his parents fled Earth and took up refuge on the planet Jekuul which boasted 2 yellow suns. The native population revered the House of Zod as gods and so the family took over the planet naming it New Krypton.[2] 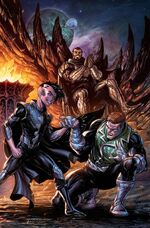 Lor's father began constructing a new civilization on New Krypton abstracting resources from local systems. Eventually this gained the attention of the Green Lantern Corps who sent Green Lanterns Hal Jordan and Kyle Rayner to investigate. Zod went to greet the Lanterns but was attacked prompting the family to brutally defeat them and imprison them.[2] Zod then gave Eradicator the task of analyzing their Green Lantern Rings to uncover the secrets of the corp. After numerous attempts to negotiate with Jordan he summoned his ring from its containment chamber and attempted to escape but were stopped by the locals who had weapons capable of piercing through constructs. Jordan then gave his ring to Rayner and sent him back to their headquarters on Mogo.[3]

Shortly after the escape Rayner arrived back with a Lantern strike force of 8 and began fighting the locals. Lor and his parents then attacked the Lanterns to buy time for Eradicator to finish his analysis of the ring.

Retrieved from "https://dc.fandom.com/wiki/Lor-Zod_(Prime_Earth)?oldid=2616367"
Community content is available under CC-BY-SA unless otherwise noted.