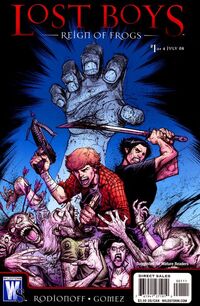 Lost Boys: Reign of Frogs is a four-issue limited series published under DC's WildStorm Productions imprint. This series does not take place within mainstream DC Comics continuity, nor mainstream WildStorm continuity. Nor does it share continuity with any other non-associated WildStorm titles. This series is based on the 1987 feature film The Lost Boys and its 2008 sequel The Lost Boys: The Tribe. As per the The Lost Boys: The Tribe official website, the comic book series is considered a canonical addition to the Lost Boys mythos. In the movies, the roles of Alan and Edgar Frog are played by Jamison Newlander and Corey Feldman (respectively).

Retrieved from "https://dc.fandom.com/wiki/Lost_Boys:_Reign_of_Frogs_Vol_1?oldid=1817217"
Community content is available under CC-BY-SA unless otherwise noted.