Never trust a monkey in love.

Monsieur Mallah is a super-intelligent intellectual gorilla with a machine gun. He is also a charter member of the Brotherhood of Evil, and an enemy of the Doom Patrol. Most frequently, he is seen taking orders from the Brain, a disembodied brain in a metallic case, who is responsible for creating him and who he is also in a relationship with.

As a scientist, the man who would one day become known as the Brain experimented on animals to raise their intelligence. In one of his experiments, he captured a gorilla and raised its I.Q. to the genius level of 178.[1] He named the gorilla Monsieur Mallah and educated him for almost a decade before making him his personal assistant. The scientist's colleague, Niles Caulder grew jealous of his work and arranged for the scientist to get caught in an explosion, which destroyed the scientist's body. Only the brain survived, and Caulder planned on putting his brain in a robot body.

Mallah rescued the scientist, taking his brain and transferring it to a computer network that kept it functioning. Now known simply as the Brain, the scientist and Mallah gathered together the criminal organization known as the Brotherhood of Evil in hopes of conquering the world and getting revenge on Caulder.

Caulder, now known as the Chief, through a series of other accidents that he manipulated, would form the superhero group known as the Doom Patrol. Setting out to destroy the Chief's 'pets', the Brain, Mallah, and their Brotherhood became enemies with the Patrol. Their criminal activities would also put them into opposition with the Teen Titans. 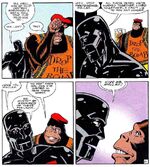 At one point, Mallah had the Brain placed in one of Robotman's bodies. In his new body, the Brain confessed to Mallah he was in love with him. Mallah revealed he felt the same way, and the two kissed. However, Robotman's body had developed sentience and vowed never to be enslaved by a brain again; when Mallah placed his lover in the body, he triggered a self-destruct mechanism, which exploded as they kissed.

The two would later resurface (the Brain back to floating in a jar). It is uncertain if the two somehow survived the explosion, or that they were brought back to life by some alteration of reality (in Zero Hour, when the world was destroyed and recreated with subtle differences, and in Infinite Crisis, Superboy-Prime's pounding on the walls of reality created ripples which corrected reality and caused history to repeat itself for several characters).

For a while, the Brotherhood raided genetic research facilities. Their plan was to unlock the secrets of cloning, in order to create a new body for the Brain, so he and Monsieur Mallah "can finally be happily ever after." 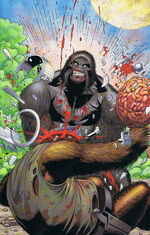 Trapped on the prison planet during the events of Salvation Run, Mallah proposes to Gorilla Grodd that as fellow Gorillas, the natural kings of the jungle, they should team up, as surely, through their combined might, they would be able to rule the entire place by themselves. Grodd laughs at Mallah for considering himself, an "absurd science experiment," comparable to "a proud child of Gorilla City." Mallah strikes Grodd and calls him a beast, causing Grodd to fly into a rage and try to kill him. Although Mallah also has a gun, and shoots Grodd several times, Grodd still has the upper hand, and is about to kill Mallah when Brain interjects, pleading for Mallah's life. Thinking better of it, Grodd picks Brain up, and beats Mallah to death with Brain, smashing Brain's protective hull in the process, and killing him as well. Before eking out his last breath, Mallah says he dies happy, taking solace in that he and Brain will finally be able to be together forever.

In The New 52, Brain and Monsieur Mallah have assisted Gorilla Grodd in taking over the remains of Central City at the time when The Black had taken over most of the world. They end up capturing Animal Man and the heroes that are with him. Animal Man's group is saved by Frankenstein and his Patchwork Army who defeat most of the gorillas as a few of them are allowed to escape in order to tell the tale of their defeat.[2]

Retrieved from "https://dc.fandom.com/wiki/Mallah_(New_Earth)?oldid=2718862"
Community content is available under CC-BY-SA unless otherwise noted.