Mars is the fourth planet from the Sun. It was home to a native race of Martians who referred to their planet as Ma'aleca'andra. Eventually the Martians died out in a fire plague known as H'ronmeer's Curse, leaving Martian Manhunter as the last living survivor of his race. Mars is also the name used for the Roman God of war. His character is taken from the earlier Greek mythology and their god of war Ares. 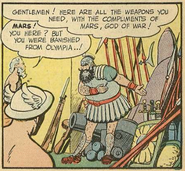 Mars
Earth-Four
Charlton Comics
Add a photo to this gallery

Retrieved from "https://dc.fandom.com/wiki/Mars?oldid=2937752"
Community content is available under CC-BY-SA unless otherwise noted.