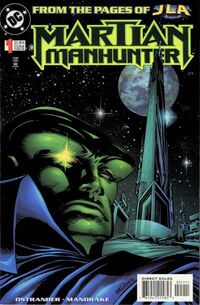 Martian Manhunter (Volume 2) was the second ongoing comic book series to feature the Martian Manhunter. It was published from October of 1998 until November of 2001, spanning a total of thirty-six issues, a special 0 issue, a 1 Million issue, and two Annuals. The series was written by John Ostrander with artistic contributions from Tom Mandrake and Doug Mahnke.

Retrieved from "https://dc.fandom.com/wiki/Martian_Manhunter_Vol_2?oldid=2246224"
Community content is available under CC-BY-SA unless otherwise noted.