Martin Stein is a brilliant scientist who specializes in nuclear energy. This lead him to become part of the nuclear superhero Firestorm. There was an accident in his lab that merged him with student Ronnie Raymond through something called the Firestorm Matrix, giving them incredible powers. They were forced to occupy the same body, and Stein would appear to Raymond as a floating head giving advice while Raymond was in control. Stein would go on to merge with others such as Mikhail Arkadin, and became Firestorm by himself for awhile. He has been involved with the Justice League of America. Martin Stein was created by Gerry Conway and Al Milgrom, first appearing in Firestorm #1. (1978) 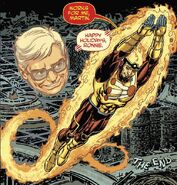 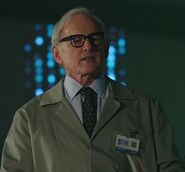