Mary Bromfield is the sister of Billy Batson who was adopted by the Bromfields. Reunited with her brother, she became his ally Mary Marvel.

Mary Batson and her twin brother Billy were both nursed by a woman named Sarah Primm. When the Batson twins were orphaned after their parents died in a car accident, Primm substituted Mary for the baby girl of another family she nursed for, who had suddenly died, and sent Billy to an orphanage.

Over a decade after his parents' death, Billy was an on-air reporter for WHIZ Radio, hosting a quiz bowl with three young contestants. During a commercial break, Billy received an urgent letter from Sarah Primm requesting his presence. He immediately went to see the dying woman, who told Billy about his twin sister, and gave him a locket broken in half. Mary, Primm told Billy before dying, wore the other half of the locket.

After the quiz bowl broadcast was over, Billy recalled that one of the contestants, Mary Bromfield, wore a broken locket, and he and his best friend Freddy Freeman trailed Mary's limousine in their super-powered forms of Captain Marvel and Captain Marvel, Jr.. Before making it home, Mary was kidnapped for ransom, prompting the two Marvels to intervene, save her, and knock out the kidnappers.

Captain Marvel then learned that Mary's locket matched his own, and that she was indeed Billy's sister. The Marvels revealed their secret identities to Mary, who wondered if, since she is Billy's twin, she could become a Marvel by saying the magic word "Shazam." Billy, however, was assured that "Old Shaz—er—you know who—wouldn't give his powers to a girl!"

Just then, the kidnappers awakened and gagged Billy and Freddy, preventing them from saying their magic words. "Oh no," exclaimed Mary, "Billy can't say 'Shazam!'" Just after inadvertently saying the word, a magic lightning bolt struck Mary Bromfield, and she was transformed into a super-powered version of herself. She then defeated the thugs by herself and freed Freddy and her brother.

Mary's super-powered self, christened "Mary Marvel" by her brother, wore a red short-sleeved blouse and red skirt, lined with gold trim, and including a lightning bolt insignia and "a cape—just like Captain Marvel's!" According to the wizard Shazam, Mary could transform into a Marvel because her "Shazam" powers were not derived from the male mythological figures who empowered Billy, but from a set of female benefactors. 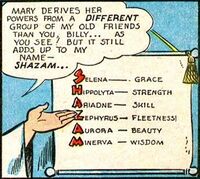 Retrieved from "https://dc.fandom.com/wiki/Mary_Batson_(Earth-S)?oldid=2785595"
Community content is available under CC-BY-SA unless otherwise noted.