Matt McGinnis is the younger brother of Terry McGinnis, and briefly served as his Robin.

Matt discovered that his brother was Batman shortly before Terry travelled back in time to face Brother Eye. After losing his brother and initially being unaccepting of Tim Drake acting in his stead, Matt left Neo-Gotham and explored Metropolis, where he helped awaken the Justice League Beyond and used them to stop The Evil Factory.

After discovering that Terry was still alive and under the control of the Evil Factory, via their agent Spellbinder, Matt was instrumental in saving his brother's mind and restoring his sanity.

With Terry back as Batman and in danger while trying to confront the Jokerz gang, Matt decided to help him introducing to a friend, Maxine Gibson, the Batcave: serving as assistance, they help Terry recover after he had to escape from Jokerz Town.[1] As Terry decided to go undercover, Matt and Maxine found a prototype suit in the Batcave and, as Terry's former suit was destroyed in his last fight, Matt got into Jokerz Town delivering the suit to his brother himself. While getting to Terry, he also discovered that Terminal knew something about Bruce Wayne.[2]

After Terry rescued Bruce from Terminal, discovering that his brother/mentor was still alive, Matt welcomed everyone back in the Batcave, where Bruce revealed to him that the Joker was still alive.[3] A few hours later, seeing that Terry was not answering the Bat-Signal, Matt was scared that something happened to his brother and called Bruce for help. Terry was safe, but in crisis: he doubted if he could keep on being Batman. After resolving the crisis, Terry answered the signal that would lead him to Tibet, searching for Ra's al Ghul, who came back from the dead.[4] While this happened, Bruce told Matt that Terry was using a dangerous suit, the X-7 prototype, equipped with an A.I. that kept pushing its user until the mission was completed.[5]

Bruce then tricked both him and Maxine and left alone to help Terry, as the suit shut down all communications: Matt and Maxine tried to find a way to re-establish the connection, and in the end succeeded in moving some satellites owned by Bruce to have an image of what's happening.[6] They were also crucial in destroying a missile launched by the League that contained a deadly toxin, using the satellite to intercept it.[7] While alone in Gotham, Matt also helped Maxine in rescuing commissioner Barbara Gordon from an ambush by a team of crooked agents.[8]

Moving into Wayne Manor permanently to help Bruce with his physical problems, Matt started watching videos of Damian and Bruce train in martial arts in secret, emulating them and self-teaching himself.[9] Then, while Terry fought Stalker, Matt tried to stop a burglar that breached into the Manor, but failed in doing so. He still realized the thief was a woman, and that she took a portrait of his brother, information he gave to Bruce.[10] After Terry was saved in his fight against both Stalker and Payback by the Ten of Hearts, Bruce guessed the burglar was Melanie Walker, the woman behind Ten of Hearts' mask, explaining to Matt that she had an ongoing crush on Terry and that she wanted to redeem herself in the eyes of his brother. Of course, she did not know Terry was the Batman.[11] 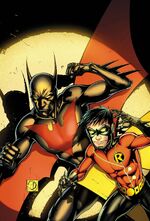 As the criminal Payback took Melanie as hostage and tricked Terry in a no-way-out situation, Bruce accepts, even if painfully, to let Matt dress up as Robin, as the young boy confessed his secret training. Bruce knows Matt is talented and naturally gifted for this, and he also knows that he wants it: given that there's no other thing he can do, he gives the green light to Matt with the condition that he must follow every single order coming out from Bruce's mouth.[12] Matt succeeds in blowing up the generators of Payback's lab, creating enough of a diversive to give his brother a chance at striking back. But when Terry realizes in horror that the help came by his younger brother in a Robin suit, rage takes over: after telling Matt he will never suit up as Robin again, Terry confronts Bruce in the Batcave, telling his mentor that it was his call to make if Matt could or could not step into their world.[13]

After accepting the fact that Matt could be much more endangered if he gets out on is own, Terry brings him in a mission to stop a shooter in the GCPD headquarters, but snaps out at him as Matt failed in following orders.[14] Back in the Manor, Matt and Bruce discuss about the situation, with Matt strangely saying that everything is Batman's, and not Terry's, fault. Bruce, without realizing it, agrees with the statement.[15] As Terry is overwhelmed by a riot exploded in Gotham, where even the citizens and the police hallucinate, seeing him as a demonic hellspawn, Bruce gives Matt an improved Robin suit and sends him to help Terry: thanks to sleeping gas stored in grenades inside the suit, Robin solves the problem just in time, as him and Batman discover that the new Scarecrow is responsible for the mysterious panic attack of the whole city.[16]

After failing to capture Scarecrow, the Dynamic Duo get back to the Batcave to get briefed: Bruce, investigating with an old friend, discovered that this Scarecrow does not use gas like his predecessor to transmit fear. The two heroes head out once again to investigate, but a terrible thing happens: Matt starts to feel the effect of Scarecrow's fear, bringing him to believe that he must kill the Batman.[17] Bruce, even if also affected by Scarecrow, guesses that the criminal transmits fear with waves from a local television station: he realizes in fact that Melanie Walker, who just came to help Terry as the Ten of Hearts, is not affected given she does not have a virtual assistant device in his home, a device Scarecrow hacked in the whole city of Gotham.

Still, while Bruce acts to disengage the devices, Robin is still on a killing frenzy and Batman must stop him without hurting him: he decides to unmask himself, even if it means letting Melanie discover his loved one is the man behind the Dark Knight's mask. Matt gets out of the fear effect and joins Terry in stopping the Scarecrow once and for all, maybe earning his spot as the Boy Wonder.[18]

Retrieved from "https://dc.fandom.com/wiki/Matthew_McGinnis_(Futures_End)?oldid=2803183"
Community content is available under CC-BY-SA unless otherwise noted.