Ask yourself, how much harm do they bring about? How many crazed psychopaths spin plots just to entangle or destroy them? It pains me. So much promise. So much power. And it seems to go wrong. That is why I have taken it upon myself to watch them. If they choose to put on these uniforms, claim to protect us, then they should be held accountable.

Maxwell Lord was a powerful business magnate and manager of the Justice League International. After the Gene Bomb gave him mind control powers, he became more and more power hungry, eventually usurping the spy organization Checkmate as its Black King. 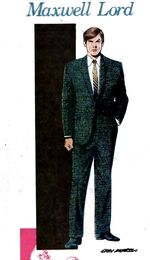 Maxwell Lord was an up-and-coming young executive at a major corporation known as Innovative Concepts who indulged in any means necessary to reach the top of the corporation. To that end, Lord established a friendship with the CEO of Innovative Concepts and became his protégé before concocting a plan to murder him for his position. Lord planned to kill the CEO during a frivolous cave-spelunking expedition, but, after seeing the man almost fall and die on accident during the trip, Lord had a change of heart.

During the trip, Lord was abducted by a renegade alien computer owned by Metron and was possessed by the intelligence called Kilg%re. Kilg%re wanted Max to set up a worldwide peacekeeping organization as part of its plan to dominate the world. The computer's programming and knowledge helped Lord become one of the richest men in the world and create the multinational company dubbed "Maxwell Lord Enterprises."

As part of Kilg%re's plan for world domination, Lord was influenced to establish a new global superhero group known as the Justice League International. Lord and his company financed the operation, actively recruited members, and staged the team's first mission against a would-be terrorist without their knowledge to gain public recognition. This plan resulted in the terrorist's death, as orchestrated by Lord.

For a while, Lord was constantly manipulated by Kilg%re into furthering his plans until Metron came to reclaim his computer. Lord eventually broke free from Kilg%re's control and destroyed the construct, leaving him with all the social and political power the machine propped him up with.[1]

Lord's origin would later be rewritten as a result of a massive multiverse crisis.

Originally just a non-powered human, Lord was one of many Earthlings bestowed with super-powers during the invasion of the Dominators, which resulted in a Gene Bomb exploding. The bomb activated the latent metagene present in a small percentage of Earth inhabitants - a gene which Lord had - giving him the new power to sense and control the minds of others, albeit at great difficulty.

After this point, the super villain Dreamslayer and his team of Extremists took over Lord's body and "supercharged" his mind control ability to control thousands of minds at once. Using Lord's body and power, Dreamslayer caused the JLI to lose its charter and almost forced them to disband. Finally, however, the mortally-wounded Silver Sorceress used her own power to contain Dreamslayer within her own mind as she died, killing it with her. Lord was successfully freed of the control, but his power had seemingly burnt out. 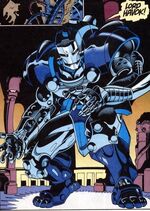 After these events, Lord was diagnosed with a brain tumor and seemingly died.

However, this itself proved as an opportunity for Kilg%re, having been patiently waiting since its control had been broken, to reinstate power over Lord. Kilg%re saved Lord's original consciousness by downloading it into the robotic body of one of the Extremists, turning Maxwell into the cyborg Lord Havok. In this form, he spent some time testing the League, putting them through mysterious trials for their own benefit. He also took control of the secret organization known as the Arcana.

Over time, Lord's Lord Havok body began to more closely resemble his human form. He pulled together several former JLI members to form a new team he could manage called the "Super Buddies," advertised as "Heroes the common man could call."

Due to the effects of a massive multiversal event, Lord's history was heavily rewritten.

Lord was no longer a cyborg and was secretly a criminal mastermind during his entire tenure with the Justice League.

In this continuity, Lord rose to power and corporate status as a result of his father's death and mother's prodding towards controlling superhumans and establishing dominance against enemies. To that end, he manipulated the events that led to the formation of the Justice League International while at the same time, he sabotaged JLI efforts in order to render the superhero team as ineffectual as possible. The entire time, he gathered sensitive information and weaknesses about the world's superheroes.

The destruction of Coast City by Mongul during the death and return of Superman resulted in the death of Lord's mother, furthering his resentment for superheroes.

Lord went about using his mental powers and resources to work his way up into the spy organization Checkmate and establish control over the metahuman community for the sake of protecting the world from their influence. [2] His former ally Ted Kord, a founding member of the JLI, discovered Lord's conspiracy and threatened to expose him, forcing Lord to murder him with a gunshot to the head. [3]

With his tracks successfully covered, Lord was given control of Batman's Brother Eye project (created to monitor all superhuman contact) by an alternate-earth version of Lex Luthor named Alexander Luthor, Jr.. Lord used the technology to infect an army of Earthlings into becoming an army of hulking O.M.A.C.s programmed to hunt down and kill all superhumans.

Lord also used his powers to mind control Superman to brutally beat up Batman and attack Wonder Woman, making him believe he was fighting his old enemies. Lord had never had the ability to control someone to such an extent, but he revealed that he had been subtly increasing his psychic hold over Superman over the course of years.

After barely escaping from Superman, Wonder Woman confronted Lord and bound him in her Lasso of Truth. She demanded he tell her how to free Superman from his control, but Lord told her the only way would be his own death. For the good of humanity, Wonder Woman grabbed Lord's head and snapped his neck.

Even through death, Lord shattered the superhero community by predicting his own murder and having Brother Eye cast the footage of his execution across the world. Lord became a martyr of sorts, ruining Wonder Woman's reputation for murdering him so grotesquely. Superman and Batman, though they were saved by Wonder Woman's actions, rebuked her decision and distanced themselves from her.

During the aftermath, Lord was entombed below the Hall of Justice.

Maxwell Lord as a Black Lantern

When the embodiment of death Nekron revived all the corpses throughout the universe in what would be known as the Blackest Night, Lord's dead body was revived as a Black Lantern.

Lord targeted Wonder Woman and lured her to Arlington National Cemetery with a trail of slaughtered bodies. When she arrived at the scene, he sprung a trap on her and used black rings to revive the bodies of all the men he had just killed. Wonder Woman used her lasso to destroy Max and turn the other undead to dust.

However, later in the night, Lord recovered from his destruction and resumed his attack on Wonder Woman, at this point having been deputized as a Star Sapphire. She encased his body in a violet crystal and shattered it to pieces. Though he was once again disabled, the corpse continued to taunt her as she left to reunite with the other heroes. 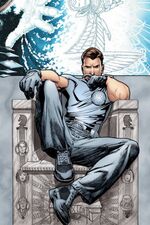 Following the penultimate fight and defeat of Nekron, Lord was permanently brought back to life by the power of the White Light Entity, along with other heroes and villains.

Guy Gardner, a former JLI member that Lord had betrayed, tried to restrain him but Max "convinced" Guy with his mind control powers to let him be. Lord then used the opportunity to flee to parts unknown.

With a machine to amplify his power, Lord temporarily mind-controlled the entire world to forget his existence. [4] With a fresh start, Lord stealthily reformed an all new Justice League International and resumed his position as head of Checkmate.

However, Lord discovered his resurrection came with the unsavory effect of turning those he tried to mentally control into zombified creatures. In order to reverse his curse, Lord tried to "earn" his life back by actively stopping a metahuman war lead by Magog. Lord mind-controlled Magog and Captain Atom to fight, causing the unfortunate deaths of thousands of people in Chicago, before influencing Magog to commit suicide. Having technically averted war, Lord's original powers were restored. [5]

Along the way, Lord studied and reevaluated the functionality of his O.M.A.C monsters while initiating his new endgame plan: to kill Wonder Woman in revenge for his own murder. Lord worked with Professor Ivo, Cadmus, and scientist associated with the Creature Commandos to clone his perfect killing machine - OMAC Prime, with the instruction to destroy Wonder Woman.

During his efforts, Lord was confronted by Power Girl but managed to distract her using a clone he had made from her DNA. It was later revealed he mentally controlled Donna Anderson, Chief Financial Officer of Powergirl's Starrware Industries, to covertly embezzle more than $50 million from the company into his own pocket. He then murdered Donna by making her death look like an accidental drug overdose.

Splitting his plan to factor in both Power Girl and Wonder Woman, Lord mentally controlled Power Girl into attacking the Justice League International before sending OMAC Prime to New York City and Los Angeles to destroy Wonder Woman. Lord's plan was successfully foiled by the Justice League International, and the villain was captured. Captain Atom forced Lord to undo his mind-control spell on the world, once again reinstating the memory of all his crimes.

However, Lord escaped from captivity and sent out a live feed proclaiming his continued leadership of Checkmate. He declared that the covert spy organization had now gone rogue under his leadership and swore to continue to police metahumans, all while denying all his past crimes.

Retrieved from "https://dc.fandom.com/wiki/Maxwell_Lord_IV_(New_Earth)?oldid=2853039"
Community content is available under CC-BY-SA unless otherwise noted.